Building and Dwelling: Ethics for the City (Hardcover) 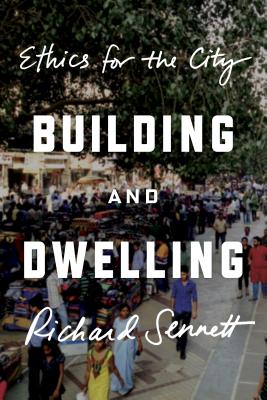 Building and Dwelling: Ethics for the City (Hardcover)

Building and Dwelling is the definitive statement on cities by the renowned public intellectual Richard Sennett. In this sweeping work, he traces the anguished relation between how cities are built and how people live in them, from ancient Athens to twenty-first-century Shanghai. He shows how Paris, Barcelona, and New York City assumed their modern forms; rethinks the reputations of Jane Jacobs, Lewis Mumford, and others; and takes us on a tour of emblematic contemporary locations, from the backstreets of Medellín, Colombia, to the Google headquarters in Manhattan. Through it all, he laments that the “closed city”—segregated, regimented, and controlled—has spread from the global North to the exploding urban agglomerations of the global South. As an alternative, he argues for the “open city,” where citizens actively hash out their differences and planners experiment with urban forms that make it easier for residents to cope. Rich with arguments that speak directly to our moment—a time when more humans live in urban spaces than ever before—Building and Dwelling draws on Sennett’s deep learning and intimate engagement with city life to form a bold and original vision for the future of cities.

Richard Sennett is the author of The Craftsman, The Fall of Public Man, and The Corrosion of Character. He teaches urban studies at the London School of Economics and at Harvard University, and is a senior fellow in Columbia University’s Center for Capitalism and Society. For thirty years, he has directed projects under the auspices of the UN that aim to guide urban development in the twenty-first century.

"No one knows more than [Sennett] about cities and the efforts that have been made over the past two centuries to order and plan them to make them more liveable for their inhabitants. It is this eternally problematic relationship between the city’s form – buildings, streets, highways, transport networks – and the quality of collective life it can offer its citizens, that has been at the heart of his life-long project as an urbanist and practising planner." —Jerry White, Times Literary Supplement

"The sociologist and urbanist Richard Sennett is a thoughtful writer with far-ranging interests and a keen eye for hidden patterns and complex processes that may escape the casual observer. He has always been a pleasure to read. His first book, The Uses of Disorder, published almost 50 years ago (1970), was a reflection on the value of anti-authoritarian or anti-hierarchical “anarchy” in city life, and his new book, his 15th, is a more elaborate, and more sophisticated, take on his original insights." —Shlomo Angel, Wall Street Journal

"[Building and Dwelling] distills into a single volume [Sennett's] thoughts on how urban design shapes the ways we relate to one another . . . Sennett is as passionate as ever about the richness and complexity of public life . . . [he] needles Google's New York headquarters, which he finds to be an island frat house, introspective and infantile, 'in the city but not of it'." —Justin McGuirk, The New Yorker

"[Building and Dwelling] reads like the summation of a life lived in cities and is, ultimately, a paean to their unpredictability, a call for tolerance and a celebration of difference." —Edwin Heathcote, The Financial Times

"Building and Dwelling is a big-hearted book that celebrates cities as it theorizes them. Richard Sennett entertainingly translates his lifetime of experience as an academic, traveler and city planner into a winding narrative about how cities are and how they should be. " —Ryne Clos, Spectrum Culture

"Sociology professor at both LSE and Harvard, [Richard Sennett] embodies Ruskin’s belief that “of thousands who can think, there is one who can see”. He sees the modern city. He reads its secrets as he walks down the street, kicking over the detritus of its past." —Simon Jenkins, The Sunday Times

"Constantly stimulating . . . A lateish-life appraisal of what Richard Sennett has read, written and, most vitally, witnessed on the street or in the marketplace in the tradition of the sharp-eyed, sharp-nosed flâneur taking in every sensation" —Jonathan Meades, The Guardian

"Remarkably empathetic and entertaining . . . An enjoyable meditation on the past, present, and future of urban life. " —Andrew Kinaci, The Global Grid