Age of Anger: A History of the Present (Hardcover) 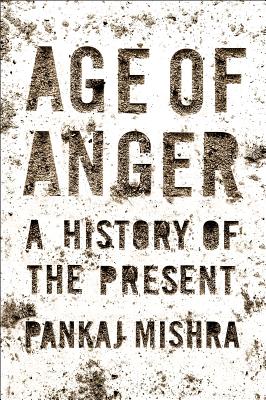 Age of Anger: A History of the Present (Hardcover)

How can we explain the origins of the great wave of paranoid hatreds that seem inescapable in our close-knit world—from American shooters and ISIS to Donald Trump, from a rise in vengeful nationalism across the world to racism and misogyny on social media? In Age of Anger, Pankaj Mishra answers our bewilderment by casting his gaze back to the eighteenth century before leading us to the present.

He shows that as the world became modern, those who were unable to enjoy its promises—of freedom, stability, and prosperity—were increasingly susceptible to demagogues. The many who came late to this new world—or were left, or pushed, behind—reacted in horrifyingly similar ways: with intense hatred of invented enemies, attempts to re-create an imaginary golden age, and self-empowerment through spectacular violence. It was from among the ranks of the disaffected that the militants of the nineteenth century arose—angry young men who became cultural nationalists in Germany, messianic revolutionaries in Russia, bellicose chauvinists in Italy, and anarchist terrorists internationally.

Today, just as then, the wide embrace of mass politics and technology and the pursuit of wealth and individualism have cast many more billions adrift in a demoralized world, uprooted from tradition but still far from modernity—with the same terrible results.

Making startling connections and comparisons, Age of Anger is a book of immense urgency and profound argument. It is a history of our present predicament unlike any other.

Pankaj Mishra is the author of From the Ruins of Empire, Age of Anger, and several other books. He is a columnist at Bloomberg View and writes regularly for The Guardian, the London Review of Books, and The New Yorker. A fellow of the Royal Society of Literature, he lives in London.

“Mishra may well be the ideal writer to diagnose our current moment . . . In Age of Anger, Mishra has produced an urgent analysis of a moment in which the forgotten and dispossessed are rising up to challenge everything we thought we knew about the state of the world.” —Sebastian Strangio, Los Angeles Review of Books

“Important, erudite . . . Mishra dwells in the realm of ideas and emotions, which get short shrift in most accounts of global politics. So it's bracing and illuminating for him to focus on feelings . . . A decent liberalism would read sharp critics like Mishra and learn.” —Franklin Foer, The New York Times Book Review

"Pankaj Mishra, attempting to make sense of this confusing world of ours, makes a compelling, erudite case that the disrupting forces of globalization and rising income inequality inevitably provoke backlashes." —Nishant Dahiya, NPR

"Columnist and historian Pankaj Mishra has named a moment and an era: His brilliant new book Age of Anger: A History of the Present looks at the rising tide of radical nationalism, racism, intolerance, misogyny, xenophobia, and fascism that's sweeping away calmer and more measured opposition all over the world, and he attempts to understand the phenomena before it engulfs everybody on the planet. . . Fiercely literate and eloquent.” —Steve Donoghue, The Christian Science Monitor

“In its literacy and literariness, [Age of Anger] has the feel of Edmund Wilson’s extraordinary dramas of modern ideas—books like To the Finland Station—but with a different endpoint and a more global canvas. Mishra reads like a brilliant autodidact, putting to shame the many students who dutifully did the reading for their classes but missed the incandescent fire and penetrating insight in canonical texts.” —Samuel Moyn, The New Republic

"A short book into which a lot of intellectual history has been packed . . . Nearly every page illuminates the current political climate." —Laura Miller, Slate

“In probing for the wellspring of today’s anger [Pankaj Mishra] hits on something real. He traces our current mood back to the French Enlightenment of the 18th century. . . Along with quotations from Voltaire, Rousseau, and other familiar figures of Western Civ, Age of Anger includes observations from Iranian, Chinese, Indian, Japanese, and other nations’ scholars; their perspectives complement Mishra’s deep understanding of global tensions.” —Peter Coy, Bloomberg Businessweek

“Erudite …[In] Age of Anger: A History of the Present, which was conceived before Brexit and Trump, the Indian nonfiction writer and novelist Pankaj Mishra argues that our current rage has deep historical roots.” —Bryan Walsh, Time

“A bowel-churning kick in the guts . . . [Pankaj Mishra's] vision is unusually broad, accommodating and resistant to categorisation. It is the kind of vision the world needs right now . . . Age of Anger is vitally germane to the global expressions of discontent that we are now witnessing” —Christopher de Bellaigue, Financial Times

“With a deep knowledge of both Western and non-Western history, and like no other before him, Pankaj Mishra comes to grips with the malaise at the heart of these dangerous times. This is the most astonishing, convincing, and disturbing book I’ve read in years.” —Joe Sacco

“In this urgent, profound and extraordinarily timely study, Pankaj Mishra follows the likes of Isaiah Berlin, John Gray and Mark Lilla by delving into the past in order to throw light on our contemporary predicament, when the neglected and dispossessed of the world have suddenly risen up in Nietzschean ressentiment to transform the world we thought we knew.” —John Banville

"In Age of Anger: A History of the Present, Pankaj Mishra offers a panoramic survey of the populist wind roiling the world and a genealogy of the ressentiment propelling it. Lucid, incisive and provocative, the book may be the most ambitious effort yet to diagnose our social condition. With erudition and insight, it explains why movements from below are entrusting their future to paternalistic demagogues in the expectation of rewards from above." —Muhammad Idrees Ahmad, The National