Here I Am: A Novel (Hardcover) 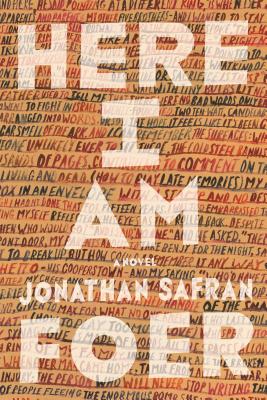 Here I Am: A Novel (Hardcover)

A monumental novel from the bestselling author of Everything Is Illuminated and Extremely Loud and Incredibly Close, Jonathan Safran Foer's Here I Am

How do we fulfill our conflicting duties as father, husband, and son; wife and mother; child and adult? Jew and American? How can we claim our own identities when our lives are linked so closely to others’? These are the questions at the heart of Jonathan Safran Foer’s first novel in eleven years—a work of extraordinary scope and heartbreaking intimacy.

Unfolding over four tumultuous weeks in present-day Washington, D.C., Here I Am is the story of a fracturing family in a moment of crisis. As Jacob and Julia Bloch and their three sons are forced to confront the distances between the lives they think they want and the lives they are living, a catastrophic earthquake sets in motion a quickly escalating conflict in the Middle East. At stake is the meaning of home—and the fundamental question of how much aliveness one can bear.

Showcasing the same high-energy inventiveness, hilarious irreverence, and emotional urgency that readers loved in his earlier work, Here I Am is Foer’s most searching, hard-hitting, and grandly entertaining novel yet. It not only confirms Foer’s stature as a dazzling literary talent but reveals a novelist who has fully come into his own as one of our most important writers.

“Dazzling . . . A profound novel about the claims of identity, history, family, and the burdens of a broken world.” —Maureen Corrigan, NPR’s “Fresh Air”

Jonathan Safran Foer is the author of the novels Everything Is Illuminated, Extremely Loud and Incredibly Close, Here I Am, and the nonfiction book Eating Animals. His work has received numerous awards and been translated into thirty-six languages. He lives in Brooklyn, New York.

“[Here I Am is] an ambitious platter of intellection and emotion. Its observations are crisp; its intimations of doom resonate; its jokes are funny. Here I Am consistently lit up my pleasure centers . . . This is also Mr. Foer’s best and most caustic novel, filled with so much pain and regret that your heart sometimes struggles to hold it all.” —Dwight Garner, The New York Times

“Dazzling . . . A profound novel about the claims of identity, history, family, and the burdens of a broken world.” —Maureen Corrigan, NPR’s “Fresh Air”

“Here I Am is one of those books, like Middlemarch, or for that matter Gone Girl, which lays bare the interior of a marriage with such intelligence and deep feeling and pitiless clarity, it’s impossible to read it and not re-examine your own family, and your place in it.” —Lev Grossman, Time

“Brilliant, always original . . . Certain set pieces . . show a masterly sense of timing and structure and deep feeling . . . Foer strews small, semiprecious comic and gnomic gems all along the trail he is breaking . . Here I Am is not only the novel's title but also, maybe, an announcement of its ambitious and crazy-talented author's literary residence—an announcement that not only his location but his basic sensibility and very identity are to be found in this work.” —Daniel Menaker, The New York Times Book Review

“Here I Am, Jonathan Safran Foer’s third novel, makes of his readers a battalion of Alices, constantly shrinking and growing as they fall prey to seductive narrative inducements. At one moment we are considering the rage that can simmer within a marriage, the next we’re pondering the imminent destruction of Israel – in the world of the novel, not imaginary but real. The minutiae of domestic life and individual idiosyncrasy are so involving . . . [And] its structure is more reflective of its themes and concerns than is at first apparent.” —Alex Clark, The Guardian

“I fled through Jonathan Safran Foer’s Here I Am and halfway through I was in tears and again a bit further on, more tears—as a father, as a son and as a husband. The last book that did this was Cormac McCarthy’s The Road and in some way this book is not dissimilar—there is a family in crisis and there is an apocalypse—but The Road is all darkness with brief spasms of light, and although Here I Am is also a deeply melancholy book about a doomed family, it is wickedly funny, so that you are laughing too, as it all goes to hell. A book with an enormous and furious heart. I loved it.” —Nick Cave, musician

“Here I Am is a wondrous novel, one of the most memorable books in years. Jonathan Safran Foer is never intimidated by big, bold topics (Israel’s potential demise) but also unafraid to grapple with one of the oldest but smallest themes of Western literature (“Happy families are all alike; every unhappy family is unhappy in its own way”). There’s no American novelist today who writes so profoundly about teenage angst (especially boys), about the dynamics of closely-knit families, about sibling relationships, about parental fears of failure with their children.” —Charles R. Larson, Counterpunch

"[A] startling and urgent novel . . . There are scenes so sad and so funny and so wry that I texted a friend repeatedly as I was reading it, just to say “goodness me!” . . . [T]he soul, if you will, of this novel is not in its technique, but in its soulfulness.” —Stuart Kelly, The Scotsman (UK)

“Foer tests his own boundaries of spirituality and sexuality, ambition and sacrifice, originality and influence, revisiting themes and techniques from his earlier books. With this novel, he is stepping up to compete for his place in literary history . . . Foer rises to the rhetorical challenges of this plot, paying full attention to its comic, apocalyptic, psychological, emotional and historic possibilities. ” —Elaine Showalter, Prospect (UK)

“A substantial, engaging novel, full of suspense, searching and humor, calling upon its readers, in turn, to locate themselves with respect to the intimate portrait it draws of families responding to personal and political crises.” —John Goldbach, The Toronto Globe and Mail

“Funny scenes and characters leaven the melancholy of Here I Am, as it chronicles the way small problems in a marriage can amass until they devastate . . . Foer, who first won readers over with youthful exuberance, now proves he can write just as well about growing older. Here I Am is a stunner of a family saga.” —Jenny Shank, Dallas Morning News

“Hilarious and heart-rending . . . Here I Am is the meticulous portrait of a family’s disintegration, but the ‘portrait’ in this case is far more cinematic than painterly, hopping back and forth in time and from consciousness to consciousness to create a dynamic narrative full of painfully real characters.” —Daniel Akst, Newsday

“Brilliant . . . The book ends on a sorrowful and deeply poignant scene, but even the moments of pain and loss do not diminish the vital spirit, so authentically Jewish, that is the real glory of Here I Am.” —Jonathan Kirsch, Jewish Journal

“[Foer] imbues Here I Am with raw emotion and genuine empathy. Jacob is a sympathetic character, his story hums with energy.” —Trine Tsouderos, The Chicago Tribune

“There is an undeniable joy to be had in reading Foer’s textured, playful prose.” —Constance Grady, Vox

“[Here I Am] is a towering and glorious thing . . . And it is also, possibly, the funniest literary novel I have ever read.” —Giles Coren, The Times (UK)

“Highly enjoyable and extremely funny . . . After a year full of unnecessarily bloated books it is a joy to read one that actually merits the space . . . Safran Foer is the absolute master of his fiction universe.” —Claire Lowdon, Times Literary Supplement

“Here I Am validates [Jonathan Safran Foer]'s status as one of our generation's great American novelists . . . the story thrives on Foer's uncanny ability to cunningly fold the perceptual sets of multiple generations into a modern national epic.” —Dan Frazier, Nylon

“[Foer's] writing has taken on a sly maturity that feels fresh and new. Here I Am is destined to be a polarizing, much-discussed novel. Love it or hate it, it is well worth your time.” —Ian Schwartz, BookPage

“[Foer] thinks with intensity and nuance about subjects that are hard because they are big.” —Gemma Sief, Bookforum

“A book that is as humorous as it is tragic which is to say, at its best, a mirror of life as we actually live it.” —Geraldine Brooks, Moment

“Foer is brilliant on the quotidian tortures of marital discord.” —Alex Preston, The Observer (UK)

"[Here I Am] is at once painfully honest and genuinely hilarious—and full of emotional surprises that will leave you reeling.” —Elle

“Here I Am, an epic of family and identity . . . offers an unflinching, tender appraisal of cultural displacement in an uncertain age.” —Rebecca Swirsky, The Economist

“Foer's intensely imagined and richly rewarding novel . . . is a teeming saga of members of the [Bloch] family . . . Throughout, his dark wit drops in zingers of dialogue, leavening his melancholy assessments of the loneliness of human relationships and a world riven by ethnic hatred. He poses several thorny moral questions, among them how to have religious faith in the modern world, and what American Jews' responsibilities are toward Israel.” —Publishers Weekly (starred review)

“Here I Am signals the accomplishment of a writer in full control of his extraordinarily creative imagination, who has become comfortable with pushing the conventions of fiction to reveal how ordinary people respond to their fracturing world . . . In Here I Am, the irresistible narrative gymnastics are as energetic and dazzling as ever and are in full service of a big, important novel from a confident, mature writer.” —Jeanette Zwart, Shelf Awareness

“Foer’s . . . polyphonic, and boldly comedic tale of one family’s quandaries astutely and forthrightly confronts humankind’s capacity for the ludicrous and the profound, cruelty and love.” —Booklist (starred, boxed review)

"[Here I Am] showcases Foer's emotional dexterity even as it takes place across a wider canvas than his previous books . . . This is great stuff, written with the insight of someone who has navigated the crucible of family, who understands how small slights lead to crises, the irreconcilability of love . . . Sharply observed." —Kirkus Reviews