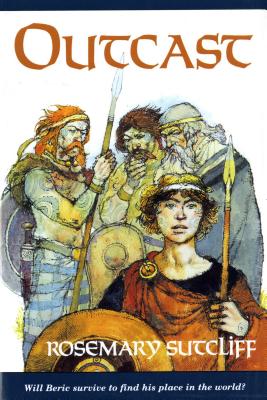 From author Rosemary Sutcliff, author of the classic tale The Eagle of the Ninth, comes Outcast, the tale of an orphan boy in the ancient world.

When a Roman ship is wrecked off the coast of Britain, an infant, Beric, is the only survivor, saved by members of a British tribe. They name him Beric and bring him up among them, until the time comes when they can ignore his ancestry no longer. Then Beric is cast out from the only home he has ever known and forced to find his one place in a treacherous world.

With illustrations by Richard Kennedy, Outcast is sure to delight middle grade lovers of historical adventure.

Richard Kennedy (1910-1989) was a children's book illustrator for Eilís Dillon, J.M. Barrie, and Astrid Lindgren, among others. He also wrote books such as Little Love Song and the memoir A Boy at the Hogarth Press, which chronicled his experiences as a teenager helping Leonard and Virginia Woolf with their printing press.
“How Beric survived...is not only incredible but gripping, convincing fiction.” —The Horn Book