Warning to the West (Paperback) 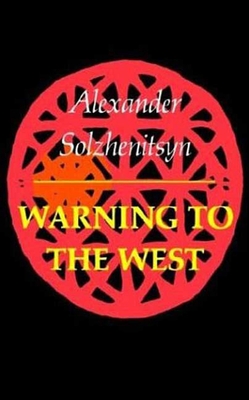 Warning to the West (Paperback)

Alexander Solzhenitsyn's Warning to the West includes the texts of the Nobel Prize-winning author's three speeches in the United States in the summer of 1975, his first major public addresses since his expulsion from the Soviet Union in 1974: on June 30 and July 9 to trade-union leaders of the AFL-CIO in Washington, D.C., and in New York City, and on July 15 to the United States Congress; and also the texts of his BBC interview and radio speech, which sparked widespread public controversy when they were aired in London in March 1976.

Solzhenitsyn's outspoken criticism of the West's growing weakness and complacency and his belief that Russia's growing strength will enable her to establish supremacy over the West without risk of a nucelar holocaust are expressed with the moral authority of a great novelist and historian.

"Solzhenitsyn mounts a public indictment of the supine inattention of the West that rings like the blows of the hammer with which Luther nailed his manifesto to the doors at Wittenberg."--Times Literary Supplement

Aleksandr Solzhenitsyn, winner of the 1970 Nobel Prize in Literature, was born in 1918. In February 1945, while he was captain of a reconnaissance battery of the Soviet Army, he was arrested and sentenced to an eight-year term in a labor camp and permanent internal exile, which was cut short by Khrushchev's reforms, allowing him to return from Kazakhstan to Central Russia in 1956. Although permitted to publish One Day in the Life of Ivan Denisovich in 1962—which remained his only full-length work to have appeared in his homeland until 1990—Solzhenitsyn was by 1969 expelled from the Writers' Union. The publication in the West of his other novels and, in particular, of The Gulag Archipelago, brought retaliation from the authorities. In 1974, Solzhenitsyn was arrested, stripped of his Soviet citizenship, and forcibly flown to Frankfurt. Solzhenitsyn and his wife and children moved to the United States in 1976. In September 1991, the Soviet government dismissed treason charges against him; Solzhenitsyn returned to Russia in 1994. He died in Moscow in 2008.