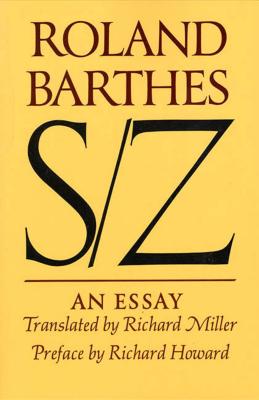 Roland Barthes (1915-1980) was a French cultural and literary critic, whose clever and lyrical writings on semiotics made structuralism one of the leading movements of the twentieth century. Barthes had a cult following and published seventeen books, including Camera Lucida, Mythologies, and A Lover's Discourse.

Richard Howard is a poet, scholar, teacher, critic, and translator. Paper Trail is published simultaneously by FSG with Howard's Inner Voices: Selected Poems, 1963-2003. He teaches at Columbia University and is poetry editor of The Paris Review.
“Language was both a luxury and a discipline for Barthes. He pursued a subject through language until he cornered it, until its disguise fell away and it was revealed in a kind of epiphany. In his own way, he cleaned the face of Paris more thoroughly than Andre Malraux did when he ordered its buildings washed down to their original colors and arranged for lights to be played upon them. Musing on the kind of painting done by someone like Ingres, Barthes says that 'painters have left movement the amplified sign of the unstable . . . the solemn shudder of a pose impossible to fix in time . . . the motionless overvaluation of the ineffable.' This might also serve as his definition of classical French prose, and in order to escape its encroachment, Barthes prodded, squeezed and sniffed at language, like a great chef buying fruits and vegetables. He munched distinctions. His sentence rhythms were those of a man who talks with his hands.” —Anatole Broyard