Looking for a Ship (Paperback) 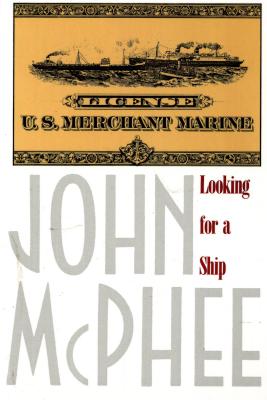 Looking for a Ship (Paperback)

This is an extraordinary tale of life aboard what may be one of the last American merchant ships. As the story begins, Andy Chase, who holds a license as a second mate is looking for a ship. In less than ten years, the United States Merchant Marine has shrunk from more than two thousand ships to fewer than four hundred, and Chase faces the scarcity of jobs from which all American merchant mariners have been suffering.

With John McPhee along, Chase finds a job as a second mate aboard the S.S. Stella Lykes, captained by the extraordinary Paul McHenry Washburn. The journey takes them on a forty-two day run down the Pacific coast of South America, with stops to unload and pick up freight at such ports as Cartagena, Valparaiso, Balboa, Lima, and Guayaquil—an area notorious for pirates. As the crew make their ocean voyage, they tell sea stories of other runs and other ships, tales of disaster, stupidity, greed, generosity, and courage. Through the journey itself and the tales told emerge the history and character of a fascinating calling.

John McPhee was born in Princeton, New Jersey, and was educated at Princeton University and Cambridge University. His writing career began at Time magazine and led to his long association with The New Yorker, where he has been a staff writer since 1965. Also in 1965, he published his first book, A Sense of Where You Are, with Farrar, Straus and Giroux, and in the years since, he has written over 30 books, including Oranges (1967), Coming into the Country (1977), The Control of Nature (1989), The Founding Fish (2002), Uncommon Carriers (2007), and Silk Parachute (2011). Encounters with the Archdruid (1972) and The Curve of Binding Energy (1974) were nominated for National Book Awards in the category of science. McPhee received the Award in Literature from the Academy of Arts and Letters in 1977. In 1999, he was awarded the Pulitzer Prize for Annals of the Former World. He lives in Princeton, New Jersey.

“The usual--that is to say, terrific--McPhee treatment, in which the author surrenders to his subject and conquers it: in this case, the merchant marine of the United States.” —The New York Times Book Review

“Looking for a Ship is not a treatise on the decline of the American merchant marine, any more than Moby-Dick was meant to be a Journal off Commerce report on the whaling industry...Style is what McPhee is loaded down to the Plimsoll marks in: felicitous phrases, keen observation, the knack of unloading a cargo of information without hitting the reader on the head with a jumbo boom.” —Richard F. Shepard, The New York Times