The Proper Study of Mankind: An Anthology of Essays (Paperback) 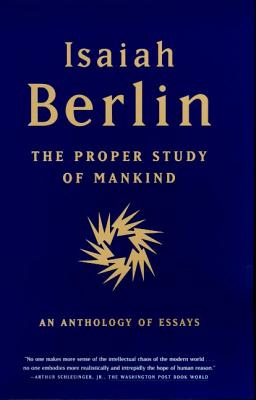 The Proper Study of Mankind: An Anthology of Essays (Paperback)

Isaiah Berlin was one of the leading thinkers of our time and one of its finest writers. The Proper Study of Mankind brings together his most celebrated writing: here the reader will find Berlin's famous essay on Tolstoy, "The Hedgehog and the Fox"; his penetrating portraits of contemporaries from Pasternak and Akhmatova to Churchill and Roosevelt; his essays on liberty and his exposition of pluralism; his defense of philosophy and history against assimilation to scientific method; and his brilliant studies of such intellectual originals as Machiavelli, Vico, and Herder.

Isaiah Berlin (1909-97) was born in Riga, Latvia, and immigrated to England in 1921. At Oxford, he was a Fellow of New College and of All Souls, and founding president of Wolfson College.

Roger Hausheer contributed to The Proper Study of Mankind from Farrar, Straus and Giroux.

Roger Hausheer contributed to The Proper Study of Mankind from Farrar, Straus and Giroux.

“Berlin . . . addresses his essays to the general reader, and he speaks with such infectious energy that he sweeps us up and carries us with him into territory that had seemed inaccessible. He becomes everyman's guide to everything exciting in the history of ideas.” —Robert Darnton, The New York Review of Books

“No one makes more sense of the intellectual chaos of the modern world, no one has more searching perceptions of the need and the limits of human judgment, no one embodies more realistically and intrepidly the hope of human reason.” —Arthur Schlesinger, Jr., The Washington Post Book World