Radiance of Tomorrow: A Novel (Paperback) 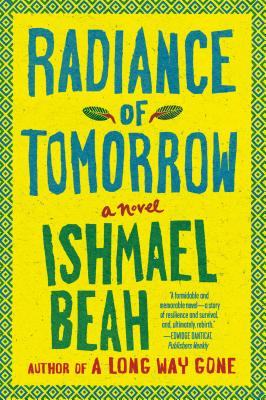 Radiance of Tomorrow: A Novel (Paperback)

“Beah's lush and beautiful prose draws the reader into a story both devastating and uplifting. What happens after true evil destroys a country? In A Long Way Gone Beah wrote a moving memoir about the carnage in his native Sierra Leone. Now, his novel deals with what comes after the battles are over. How do people confront what they have endured and move on? Beah creates many memorable characters, each with tales that will break your heart while they also give you hope for the future.”
— Deon Stonehouse, Sunriver Books, Sunriver, OR

A haunting, beautiful first novel by the bestselling author of A Long Way Gone.
Named one of the Christian Science Monitor's best fiction books of 2014

With the gentle lyricism of a dream and the moral clarity of a fable, Radiance of Tomorrow is a powerful novel about preserving what means the most to us, even in uncertain times.

When Ishmael Beah's A Long Way Gone was published in 2007, it soared to the top of bestseller lists, becoming an instant classic: a harrowing account of Sierra Leone's civil war and the fate of child soldiers that "everyone in the world should read" (The Washington Post). Now Beah, whom Dave Eggers has called "arguably the most read African writer in contemporary literature," has returned with his first novel, an affecting, tender parable about postwar life in Sierra Leone.

At the center of Radiance of Tomorrow are Benjamin and Bockarie, two longtime friends who return to their hometown, Imperi, after the civil war. The village is in ruins, the ground covered in bones. As more villagers begin to come back, Benjamin and Bockarie try to forge a new community by taking up their former posts as teachers, but they're beset by obstacles: a scarcity of food; a rash of murders, thievery, rape, and retaliation; and the depredations of a foreign mining company intent on sullying the town's water supply and blocking its paths with electric wires. As Benjamin and Bockarie search for a way to restore order, they're forced to reckon with the uncertainty of their past and future alike.

Ishmael Beah, born in 1980 in Sierra Leone, West Africa, is the New York Times bestselling author of A Long Way Gone: Memoirs of a Boy Soldier. The book has been published in over thirty languages and was nominated for a Quill Award in 2007. Time magazine named the book as one of the top ten nonfiction books of 2007, ranking it at number three. His work has appeared in The New York Times Magazine, Vespertine Press, LIT, Parabola, and numerous academic journals. He is a UNICEF Ambassador and Advocate for Children Affected by War; a member of the Human Rights Watch Children’s Rights Advisory Committee; an advisory board member at the Center for the Study of Youth and Political Violence at the University of Tennessee, Knoxville; visiting scholar at the Center for International Conflict Resolution at Columbia University; visiting Senior Research Fellow at the Center for the Study of Genocide, Conflict Resolution, and Human Rights at Rutgers University; cofounder of the Network of Young People Affected by War (NYPAW); and president of the Ishmael Beah Foundation. He has spoken before the United Nations, the Council on Foreign Relations, and many panels on the effects of war on children. He is a graduate of Oberlin College with a B.A. in Political Science and resides in Brooklyn, New York.

“Beah has a resilient spirit and a lyrical style all his own. Even as a multitude of wearying failures mounts, his characters retain their hopefulness in a way that's challenging and inspiring.” —Ron Charles, The Washington Post

“Written with the moral urgency of a parable and the searing precision of a firsthand account . . . There is an allegorical richness to Beah's storytelling and a remarkable humanity to his characters. We see tragedy arriving not through the big wallops of war, but rather in corrosive increments.” —Sara Corbett, The New York Times Book Review

“UNICEF Ambassador Beah writes lyrically and passionately about ugly realities as well as about the beauty and dignity of traditional ways.” —Kirkus Reviews (starred review)

“A breathtaking and unselfpitying account of how a gentle spirit survives a childhood from which all innocence has suddenly been sucked out. It's a truly riveting memoir.” —Time on A Long Way Gone