Why Grow Up?: Subversive Thoughts for an Infantile Age (Paperback) 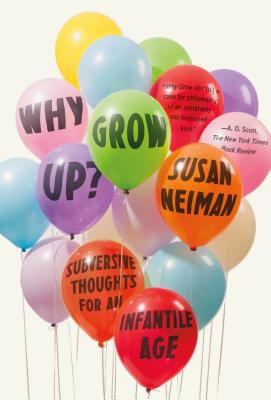 Why Grow Up?: Subversive Thoughts for an Infantile Age (Paperback)

Our culture is obsessed with youth--and why not? What's the appeal of growing old, of gaining responsibilities and giving up on dreams, of steadily trading possibility for experience?

The philosopher Susan Neiman argues that the absence of appealing models of maturity is not an accident: by describing life as a downhill process, we prepare young people to expect--and demand--very little from it. In Why Grow Up?, she challenges our culture of permanent adolescence, turning to thinkers including Kant, Rousseau, and Arendt to find a model of maturity that is not a matter of resignation. In growing up, we move from the boundless trust of childhood to the peculiar mixture of disappointment and exhilaration that comes with adolescence. Maturity, however, means finding the courage to live in a world of painful uncertainty without giving in to dogma or despair. A grown-up, Neiman writes, helps to move the world closer to what it should be while never losing sight of what it is.

Why Grow Up? is a witty and concise argument for the value of maturity as a subversive ideal: a goal rarely achieved in its entirety, and all the more worth striving for.

Susan Neiman is the director of the Einstein Forum. Her previous books, which have been translated into many languages, include Why Grow Up?: Subversive Thoughts for an Infantile Age; Moral Clarity: A Guide for Grown-Up Idealists; Evil in Modern Thought: An Alternative History of Philosophy; The Unity of Reason; and Slow Fire: Jewish Notes from Berlin. She also writes cultural and political commentary for diverse media in the United States, Germany, and Great Britain. Born in Atlanta, Georgia, Neiman studied philosophy at Harvard and the Free University of Berlin, and was a professor of philosophy at Yale and Tel Aviv Universities. She is the mother of three grown children, and lives in Berlin.