The Greatest Invention: A History of the World in Nine Mysterious Scripts (Hardcover) 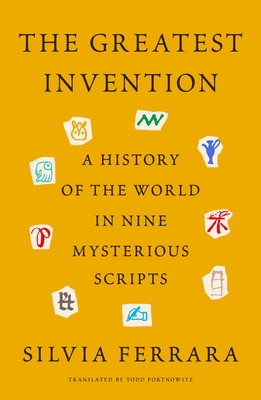 The Greatest Invention: A History of the World in Nine Mysterious Scripts (Hardcover)

In this exhilarating celebration of human ingenuity and perseverance—published all around the world—a trailblazing Italian scholar sifts through our cultural and social behavior in search of the origins of our greatest invention: writing.

The L where a tabletop meets the legs, the T between double doors, the D of an armchair’s oval backrest—all around us is an alphabet in things. But how did these shapes make it onto the page, never mind form complex structures such as this sentence? In The Greatest Invention, Silvia Ferrara takes a profound look at how—and how many times—human beings have managed to produce the miracle of written language, traveling back and forth in time and all across the globe to Mesopotamia, Crete, China, Egypt, Central America, Easter Island, and beyond.

With Ferrara as our guide, we examine the enigmas of undeciphered scripts, including famous cases like the Phaistos Disk and the Voynich Manuscript; we touch the knotted, colored strings of the Inca quipu; we study the turtle shells and ox scapulae that bear the earliest Chinese inscriptions; we watch in awe as Sequoyah single-handedly invents a script for the Cherokee language; and we venture to the cutting edge of decipherment, in which high-powered laser scanners bring tears to an engineer’s eye.

A code-cracking tour around the globe, The Greatest Invention chronicles a previously uncharted journey, one filled with past flashes of brilliance, present-day scientific research, and a faint, fleeting glimpse of writing’s future.

Todd Portnowitz is the translator of Go Tell It to the Emperor by Pierluigi Cappello; Midnight in Spoleto by Paolo Valesio; and Long Live Latin by Nicola Gardini. He is the recipient of a Raiziss/de Palchi Fellowship of the Academy of American Poets. He lives in Brooklyn, New York.

"Ferrara says she wrote the book the way she talks to friends over dinner, and that’s exactly how it reads. Instead of telling a chronological history of writing, she moves freely from script to script, island to island . . . She is constantly by our side, prodding us with questions, offering speculations, reporting on exciting discoveries . . . . her book doubles as a manifesto for collaborative research." —Martin Puchner, The New York Times Book Review

"In Silvia Ferrara’s conception of it, writing is a fragile object, nurtured over many phases of human development . . . The Greatest Invention is a celebration not of achievements, but of moments of illumination and 'the most important thing in the world: our desire to be understood.'” —Lydia Wilson, The Times Literary Supplement

"If one has any doubts that the ancient past deserves our attention as much as the future Ferrara also energetically imagines, this book should dispel them. Encountered at the right time, this book could ignite a passion, even change a life." —Booklist (Starred Review)

"Ferrara’s survey is intricate and detailed, bolstered by photos and drawings of the various writing forms . . . The result is an intellectual feast." —Publishers Weekly (Starred Review)

"Part reconnaissance, part time machine, part ode to our complex species, Ferrara's enchanting book unearths not only our writing systems but our humanity itself." —Amanda Montell, author of Cultish: The Language of Fanaticism and Wordslut: A Feminist Guide to Taking Back the English Language

"From Crete to Easter Island, everywhere in between, and back again, Ferrara illuminates the sheer magic that the invention of writing actually was, while also sharing the pure joy of being a scientist. Plus, the translation is exquisite." —John McWhorter, author of Nine Nasty Words: English in the Gutter: Then, Now, and Forever and Woke Racism: How a New Religion Has Betrayed Black America

"Deftly translated by Portnowitz, Ferrara’s book is more than a cook’s tour of the history, present, and future of writing . . . Ferrara capably conveys the sensory magic of writing: sound made visible and tangible." —Kirkus Reviews