The New Book of Middle Eastern Food: The Classic Cookbook, Expanded and Updated, with New Recipes and Contemporary Variations on Old Themes (Hardcover) 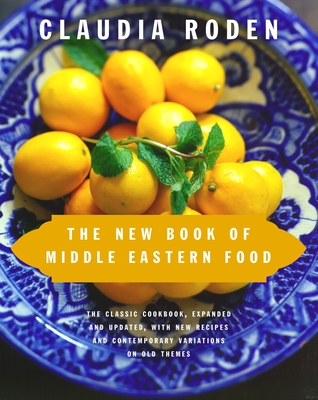 The New Book of Middle Eastern Food: The Classic Cookbook, Expanded and Updated, with New Recipes and Contemporary Variations on Old Themes (Hardcover)


Backordered
The definitive volume on Middle Eastern cooking, a modern classic from the award-winning, bestselling author of The Book of Jewish Food and Claudia Roden's Mediterranean

Originally published in 1972 and hailed by James Beard as "a landmark in the field of cookery," this new version represents the accumulation of the author's years of extensive travel throughout the ever-changing landscape of the Middle East, gathering recipes and stories.

Now featuring more than 800 recipes, including the aromatic variations that accent a dish and define the country of origin: fried garlic and cumin and coriander from Egypt, cinnamon and allspice from Turkey, sumac and tamarind from Syria and Lebanon, pomegranate syrup from Iran, preserved lemon and harissa from North Africa. Claudia Roden has worked out simpler approaches to traditional dishes, using healthier ingredients and time-saving methods without ever sacrificing any of the extraordinary flavor, freshness, and texture that distinguish the cooking of this part of the world.

Throughout these pages she draws on all four of the region's major cooking styles:
• The refined haute cuisine of Iran, based on rice exquisitely prepared and embellished with a range of meats, vegetables, fruits, and nuts
• Arab cooking from Syria, Lebanon, and Jordan—at its finest today, and a good source for vegetable and bulgur wheat dishes
• The legendary Turkish cuisine, with its kebabs, wheat and rice dishes, yogurt salads, savory pies, and syrupy pastries
• North African cooking, particularly the splendid fare of Morocco, with its heady mix of hot and sweet, orchestrated to perfection in its couscous dishes and tagines

From the tantalizing mezze—succulent bites of filled fillo crescents and cigars, chopped salads, and stuffed morsels, as well as tahina, chickpeas, and eggplant in their many guises—to the skewered meats and savory stews and hearty grain and vegetable dishes, here is a rich array of Middle Eastern cooking.
Claudia Roden was born and raised in Cairo. She completed her formal education in Paris and then moved to London to study art. She travels extensively as a food writer. Her previous books include the James Beard Award-winning Book of Jewish Food, as well as Coffee: A Connoisseur's Companion, The Good Food of Italy--Region by Region, Everything Tastes Better Outdoors, and Mediterranean Cookery, which was published in conjunction with her BBC television series on the Mediterranean. In 1989 she won the two most prestigious food prizes in Italy, the Premio Orio Vergani and the Premio Maria Luigia, Duchessa di Parma, for her London Sunday Times Magazine series The Taste of Italy. She has won six Glenfiddich prizes, including 1992 Food Writer of the Year for articles in the Daily Telegraph and The Observer magazine, and the Glenfiddich Trophy awarded "in celebration of a unique contribution to the food that we eat in Britain today." In 1999 she won a Versailles Award in France, and Prince Claus of the Netherlands presented her with the Prince Claus Award "in recognition of exceptional initiatives and achievements in the field of culture." She lives in London.