You Must Set Forth at Dawn: A Memoir (Paperback) 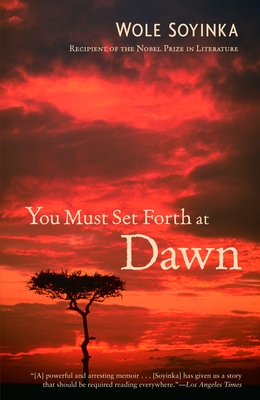 You Must Set Forth at Dawn: A Memoir (Paperback)


Not On Our Shelves—Ships in 1-5 Days
The first African to receive the Nobel Prize in Literature, as well as a political activist of prodigious energies, Wole Soyinka now follows his modern classic Ake: The Years of Childhood with an equally important chronicle of his turbulent life as an adult in (and in exile from) his beloved, beleaguered homeland.
In the tough, humane, and lyrical language that has typified his plays and novels, Soyinka captures the indomitable spirit of Nigeria itself by bringing to life the friends and family who bolstered and inspired him, and by describing the pioneering theater works that defied censure and tradition. Soyinka not only recounts his exile and the terrible reign of General Sani Abacha, but shares vivid memories and playful anecdotes–including his improbable friendship with a prominent Nigerian businessman and the time he smuggled a frozen wildcat into America so that his students could experience a proper Nigerian barbecue.
More than a major figure in the world of literature, Wole Soyinka is a courageous voice for human rights, democracy, and freedom. You Must Set Forth at Dawn is an intimate chronicle of his thrilling public life, a meditation on justice and tyranny, and a mesmerizing testament to a ravaged yet hopeful land.
Wole Soyinka is a writer of global stature, the first African ever to receive the Nobel Prize in Literature. He was imprisoned in Nigeria for his opposition to dictatorship. Soyinka is the author of Ake: The Years of Childhood and Climate of Fear, based on the prestigious Reith Lectures he delivered on the BBC.
Praise for Wole Soyinka

“What if V. S. Naipaul were a happy man? What if V. S. Pritchett had loved his parents? What if Vladimir Nabokov had grown up in a small town in western Nigeria and decided that politics were not unworthy of him? I do not take or drop these names in vain. Wole Soyinka, the Nigerian novelist, playwright, critic, and professor of comparative literature, belongs in their company.”
–John Leonard, The New York Times

“[Soyinka is] a master of language, and [is committed] as a dramatist and writer of poetry and prose to problems of general and deep significance for man.”
–Lars Gyllensten, from his presentation speech awarding Wole Soyinka the Nobel Prize in Literature, 1986

“A brilliant imagist who uses poetry and drama to convey his inquisitiveness, frustration, and sense of wonder.”
–Newsweek

“If the spirit of African democracy has a voice and a face, they belong to Wole Soyinka.”
–Henry Louis Gates, Jr., The New York Times