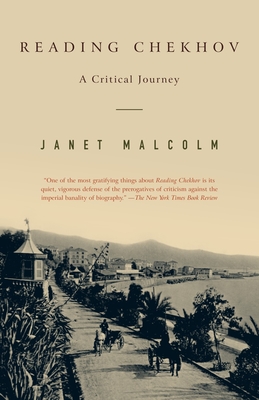 
Special Order—Subject to Availability
To illuminate the mysterious greatness of Anton Chekhov’s writings, Janet Malcolm takes on three roles: literary critic, biographer, and journalist. Her close readings of the stories and plays are interwoven with episodes from Chekhov’s life and framed by an account of Malcolm’s journey to St. Petersburg, Moscow, and Yalta. She writes of Chekhov’s childhood, his relationships, his travels, his early success, and his self-imposed “exile”—always with an eye to connecting them to themes and characters in his work. Lovers of Chekhov as well as those new to his work will be transfixed by Reading Chekhov.
Janet Malcolm was an author and a journalist at The New Yorker. Her books include Reading Chekhov: A Critical Journey, The Crime of Sheila McGough, and The Silent Woman: Sylvia Plath and Ted Hughes. Born in Prague, she grew up in New York. Janet Malcolm died in 2021.
“One of the most gratifying things about Reading Chekhov is its quiet, vigorous defense of the prerogatives of criticism against the imperial banality of biography.” —The New York Times Book Review

“[A] thoughtful and sensitive study . . . A great part of the charm and the skill of Janet Malcolm’s book lies in the very Chekhovian way she mingles personal with critical comment, taking us not only through Chekhov’s stories but through the removals and journeys of his life and her own travels in quest of his Russian haunts.” —The New York Review of Books

“With the gentle inevitability of a balloon lofting skyward, the discourse effortlessly ascends from chatter to contemplation to genuinely brilliant critique. . . . With its balance of distilled perception and companionable spirit, Reading Chekhov embodies the same qualities it celebrates.” —San Francisco Chronicle