Shipwreck at the Bottom of the World: The Extraordinary True Story of Shackleton and the Endurance (Paperback) 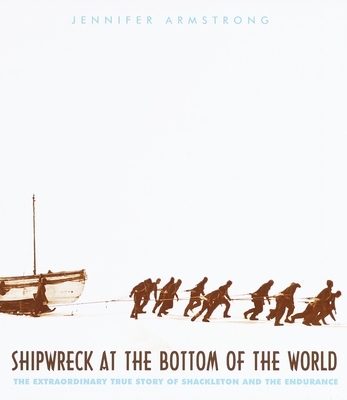 Shipwreck at the Bottom of the World: The Extraordinary True Story of Shackleton and the Endurance (Paperback)


In Stock—Click for Locations
The extraordinary true story behind Ernest Shackleton's harrowing expedition to Antarctica on the Endurance—the ill-fated ship that became trapped in ice and sank to the ocean floor. Defying the odds, the crew made it back alive, bringing with them the astounding collection of photographs included in this critically acclaimed, timeless book.

In August 1914, Ernest Shackleton and his crew sailed from England on the Endurance in an attempt to become the first team of explorers to cross Antarctica from one side to the other. Five months later and still 100 miles from land, their ship, Endurance, became trapped in ice. Defying the odds, the expedition survived another five months camping on ice floes, followed by a perilous journey through stormy seas to remote and unvisited Elephant Island. In a dramatic climax to this amazing survival story, Shackleton and five others navigated 800 miles of treacherous open ocean in a 20-foot boat to fetch a rescue ship.

Shipwreck at the Bottom of the World vividly re-creates one of the most fascinating adventure stories in history. Award-winning author Jennifer Armstrong recounts one of the most extraordinary adventure stories in history with vigor, an eye for detail, and an appreciation of the marvelous leadership of Shackleton, who brought home every single one of his men alive.
Ever since the first grade, Jennifer Armstrong knew that she would become an author. She loved making up stories and sharing them with others. Her family treasured books and this led her to become an avid reader of all types of fiction. It was no surprise when she chose to study English and American Literature at Smith College in Massachusetts.

Armstrong is the author of over 50 books for children from kindergarten through high school. Best known for writing historical fiction, she has also been successful in
creating picture books, easy readers, chapter books, young adult novels, as well as nonfiction.

Armstrong, who grew up outside of New York City, now lives in Saratoga Springs, New York.

Jennifer Armstrong is the winner of the Orbis Pictus Award for Outstanding Nonfiction for Shipwreck at the Bottom of the World. Many of her books have been designated as Notable Books by the American Library Association and the International Reading Association.

★ "A book that will capture the attention and imagination of any reader." --School Library Journal, starred review

“Shipwreck at the Bottom of the World is a book to finish in one breathless sitting, then dream about all night long.” —Riverbank Review

"This unbelievable story is enhanced by the vigorous prose; from the captivating introduction through the epilogue, it is the writing as much as the story that will rivet readers." --Kirkus Reviews