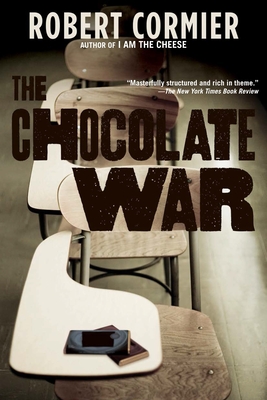 
Not On Our Shelves—Ships in 1-5 Days
One of the most controversial YA novels of all time, The Chocolate War is a modern masterpiece that speaks to fans of S. E. Hinton’s The Outsiders and John Knowles’s A Separate Peace.

After suffering rejection from seven major publishers, The Chocolate War made its debut in 1974, and quickly became a bestselling—and provocative—classic for young adults. This chilling portrait of an all-boys prep school casts an unflinching eye on the pitfalls of conformity and corruption in our most elite cultural institutions.

“The characterizations of all the boys are superb.”—School Library Journal, starred review

An ALA Best Book for Young Adults
A School Library Journal Best Book of the Year
A Kirkus Reviews Editor’s Choice
A New York Times Outstanding Book of the Year
Robert Cormier (1925-2000) changed the face of young adult literature over the course of his illustrious career. His many books include The Chocolate War, I Am the Cheese, Fade, Tenderness, After the First Death, Heroes, Frenchtown Summer, and The Rag and Bone Shop. In 1991 he received the Margaret A. Edwards Award, honoring his lifetime contribution to writing for teens.
"The Chocolate War is masterfully structured and rich in theme; the action is well crafted, well timed, suspenseful; complex ideas develop and unfold with clarity."-The New York Times Book Review

"The characterizations of all the boys are superb...  This novel [is] unique in its uncompromising portrait of human cruelty and conformity."-School Library Journal, starred review

"The novel is cleverly written with a good sense of the realistic and a good ear for dialouge, qualities which will attract any reader."-Bestsellers