The Full Spectrum: A New Generation of Writing About Gay, Lesbian, Bisexual, Transgender, Questioning, and Other Identities (Paperback) 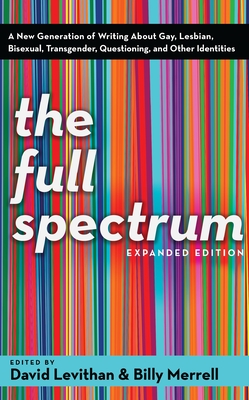 The Full Spectrum: A New Generation of Writing About Gay, Lesbian, Bisexual, Transgender, Questioning, and Other Identities (Paperback)


Special Order—Subject to Availability
Teens are more aware of sexuality and identity than ever, and they’re looking for answers and insights, as well as a community of others. In order to help create that community, YA authors David Levithan and Billy Merrell have collected original poems, essays, and stories by young adults in their teens and early 20s. The Full Spectrum includes a variety of writers—gay, lesbian, bisexual, straight, transitioning, and questioning—on a variety of subjects: coming out, family, friendship, religion/faith, first kisses, break-ups, and many others.

This one of a kind collection will, perhaps, help all readers see themselves and the world around them in ways they might never have imagined. We have partnered with the Gay, Lesbian and Straight Education Network (GLSEN) and a portion of the proceeds from this book will be donated to them.
When not writing during spare hours on weekends, David Levithan is editorial director at Scholastic and the founding editor of the PUSH imprint, which is devoted to finding new voices and new authors in teen literature. His acclaimed novels Boy Meets Boy and The Realm of Possibility started as stories he wrote for his friends for Valentine's Day (something he's done for the past 22 years and counting) that turned themselves into teen novels. He's often asked if the book is a work of fantasy or a work of reality, and the answer is right down the middle—it's about where we're going, and where we should be.

Billy Merrell was born in St. Louis, Missouri, and raised in Jacksonville, Florida. He is a writer of both poetry and prose, coauthoring the New York Times bestselling Spirit Animal series and appearing in several anthologies of poetry. His other works include Talking in the Dark, Vanilla, the Infinity Ring Secrets series, and The Full Spectrum, which was coedited with David Levithan and recipient of the Lambda Literary Award. Merrell currently lives in Brooklyn, New York, with his husband, Nico Medina.