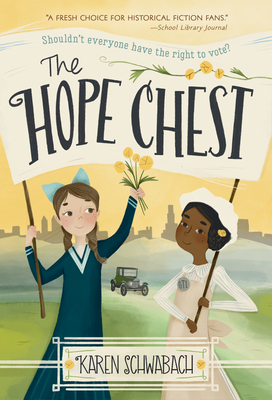 
Not On Our Shelves—Ships in 1-5 Days
Celebrate the 100th anniversary of the 19th Amendment with this stirring historical novel about women's suffrage!

She’s searching for her sister. Along the way, she finds a friend . . . and a cause.

It’s been three years since Violet’s sister, Chloe, left home, and Violet is determined to find her! She runs away and follows her sister’s trail all the way to New York and then Tennessee. There, she discovers not only Chloe but the fierce fight for women’s right to vote.

And what a fight it is! Violet and her new friend Myrtle join Chloe in the Suffragists’ cause, eager to sway legislators to their side. Violet knows that her parents would surely disapprove of her decisions, but if fighting for justice makes her the wrong kind of girl . . . then why does it feel so right?

A perfect Common Core tie-in, The Hope Chest includes back matter with period photographs, historical notes about the suffrage movement, a "Voting in America" timeline, and other activities. It's also a New York State curriculum title for fourth grade.

Don't miss Starting from Seneca Falls, another historical novel about women's suffrage from the author of The Hope Chest!
Karen Schwabach grew up in upstate New York and lived for many years in Alaska, where she taught English as a Second Language in the Yup’ik (Inuit) village of Chefornak.