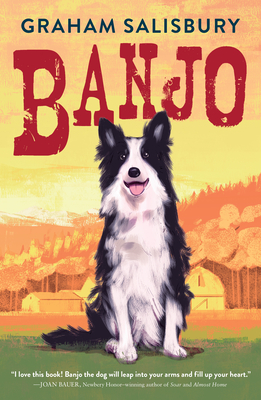 
In Stock—Click for Locations
In the spirit of of Where the Red Fern Grows and Because of Winn Dixie, this is a contemporary classic in the making about a boy and his dog, and a choice that will test their loyalty and trust.

Danny Mack is a rising rodeo star in rural Oregon. He lives on a ranch with his older brother, their dad, and his faithful border collie, Banjo.

Late one night, Danny is awakened by gunshots. Banjo has been wounded. The neighbors claim he was going after their livestock, which gives them the right to shoot the dog or have him put down. Dad reluctantly agrees. They must obey the law. Danny knows Banjo is innocent, and comes up with a desperate plan to save him--but something goes terribly wrong.

Days later, on a distant ranch, Meg Harris finds a frightened dog alone in the woods. Banjo. She takes him home and searches for the dog's owner, furious that he was abandoned. She's not going to give Banjo up easily.

Told by Danny and by Meg, this fast-paced, heartrending novel explores the deep connection between humans and animals, and reminds readers that you can't judge an animal--or a person--before you know their story.
Graham Salisbury is the author of several novels, among them the award-winning Lord of the Deep, Blue Skin of the Sea, and Under the Blood-Red Sun.
Honors and Praise for books by Graham Salisbury:
Winner of the Scott O’Dell Award for Historical Fiction
An ALA-YALSA Best Book for Young Adults
An ALA-ALSC Notable Children’s Book
A Bank Street College of Education Best Children’s Books of the Year
Multiple state awards

“Fast-paced and compelling . . . will be enjoyed by voracious and reluctant readers.” —SLJ

“An absorbing novel with a distinctive setting.” —Booklist