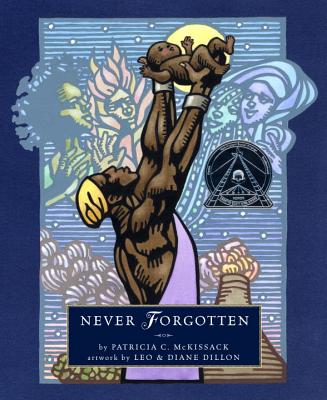 
On Our Shelves Now at:
A 2012 Coretta Scott King Author Honor Book

This gorgeous picture book by Newbery Honor winner Patricia C. McKissack and two-time Caldecott Medal-winning husband-and-wife team Leo and Diane Dillon is sure to become a treasured keepsake for African American families. Set in West Africa, this a lyrical story-in-verse is about a young black boy who is kidnapped and sold into slavery, and his father who is left behind to mourn the loss of his son. Here's a beautiful, powerful, truly unforgettable story about family, memory, and freedom.

"Forceful and iconic," raves Publishers Weekly in a starred review.
PATRICIA MCKISSACK is one of the most acclaimed authors writing for children today. She has written many award-winning books, including Never Forgotten, a Coretta Scott King Author Honor Book; Porch Lies, an ALA-ALSC Notable Children's Book; The Dark Thirty, a Newbery Honor Book; Let My People Go, recipient of the NAACP Image Award; and Mirandy and Brother Wind, a Caldecott Honor Book. Her other books include The All-I'll-Ever-Want Christmas Doll, Goin' Someplace Special, and Precious and the Boo Hag. Patricia and her husband, Frederick McKissack, are the recipients of the Coretta Scott King–Virginia Hamilton Award for Lifetime Achievement.

LEO and DIANE DILLON have illustrated over 60 books for children and have received just about every honor and award imaginable. They are the winners of two Caldecott Medals (Why Mosquitoes Buzz in People's Ears and Ashanti to Zulu), five New York Times Best Illustrated Awards (including one for the Knopf book, The People Could Fly), and numerous Coretta Scott King Awards.

Starred Review, Publishers Weekly, August 8, 2011:
"Forceful and iconic, the Dillons’ (The Secret River) woodcut-style paintings use gentle colors and strong lines to telegraph scary sequences, but do not dwell on them...The willingness to turn the dark history of the past into literature takes not just talent but courage. McKissack has both."

Starred Review, School Library Journal, August 2011:
"The pictures demonstrate the miracle of superb book illustration: how something that lies flat on the page can convey such depth, texture, and feeling. This sad but powerful tale will not be easily accessible to many kids, but here’s hoping that there are a lot of patient and appreciative adults (teachers, parents, librarians) to introduce them to it."

Starred Review, Booklist, September 1, 2011:
"The dramatic, thickly outlined acrylic-andwatercolor illustrations extend the story’s magical realism and intensify the anguish and grief in the words. Both words and images come together in a conclusion that brings hope, with the promise of freedom"

Starred Review, The Bulletin of the Center for Children's Books, November 1, 2011:
“McKissak gives her legend-making genuine momentum as well as scope….Stories of the middle passage rarely focus on the pain of those left behind, and this is a creative yet poignant treatment of that grief.”