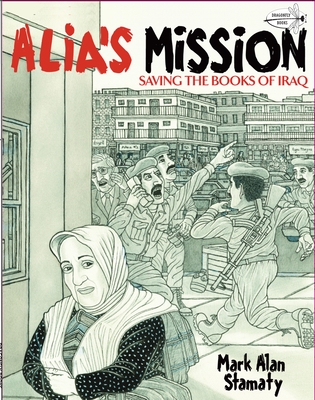 
Special Order—Subject to Availability
The inspiring story of an Iraqi librarian's courageous fight to save books from the Basra Central Library before it was destroyed in the war.
It is 2003 and Alia Muhammad Baker, the chief librarian of the Central Library in Basra, Iraq, has grown worried given the increased likelihood of war in her country. Determined to preserve the irreplacable records of the culture and history of the land on which she lives from the destruction of the war, Alia undertakes a courageous and extremely dangerous task of spiriting away 30,000 books from the library to a safe place.
Told in dramatic graphic-novel panels by acclaimed cartoonist Mark Alan Stamaty, Alia's Mission celebrates the importance of books and the freedom to read, while examining the impact of war on a country and its people.
Mark Alan Stamaty lives in New York City.