The Last Campaign: Sherman, Geronimo and the War for America (Hardcover) 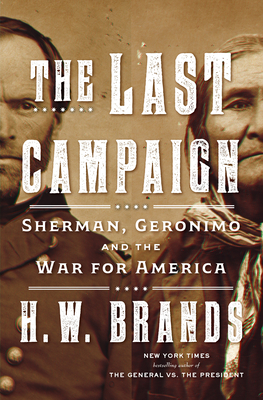 The Last Campaign: Sherman, Geronimo and the War for America (Hardcover)


On Our Shelves Now at:
Bestselling historian and Pulitzer Prize finalist H. W. Brands follows the lives of General William Tecumseh Sherman and Apache war leader Geronimo to tell the story of the Indian Wars and the final fight for control of the American continent.

"Gripping...Brands’ writing style and his mastery of history make the book an excellent introduction to the time period for newcomers, and a fresh perspective for those already familiar with this chapter in the nation’s history.” —AP

William Tecumseh Sherman and Geronimo were keen strategists and bold soldiers, ruthless with their enemies. Over the course of the 1870s and 1880s these two war chiefs would confront each other in the final battle for what the American West would be: a sparsely settled, wild home where Indian tribes could thrive, or a more densely populated extension of the America to the east of the Mississippi.

Sherman was a well-connected son of Ohio who attended West Point and rose to prominence through his scorched-earth campaigns in the Civil War. Geronimo grew up among the Apache people, hunting wild game for sustenance and roaming freely on the land. After the brutal killing of his wife, children and mother by Mexican soldiers, he became a relentless avenger, raiding Mexican settlements across the American border. When Sherman rose to commanding general of the Army, he was tasked with bringing Geronimo and his followers onto a reservation where they would live as farmers and ranchers and roam no more. But Geronimo preferred to fight.

The Last Campaign is a powerful retelling of a turning point in the making of our nation and a searing elegy for a way of life that is gone.
H. W. BRANDS holds the Jack S. Blanton Sr. Chair in History at the University of Texas at Austin. He has written more than a dozen biographies and histories, including The General vs. the President, a New York Times bestseller, and Our First Civil War, his most recent book. Two of his biographies, The First American and Traitor to His Class, were finalists for the Pulitzer Prize.
“One of the country’s most prolific historians...[Brands puts the Indian Wars] in the widest possible perspective even as he examines them at the most intimate level.”
—The Boston Globe

“A lively account of the post-Civil War conflict over the territory that became the United States...[Brands is] a gifted storyteller, draw[ing] on vivid accounts by soldiers, settlers, chiefs and warriors.”
—The Pittsburgh Post-Gazette

“Though they’re mentioned in the subtitle, William Tecumseh Sherman and Geronimo often feel more like supporting players in The Last Campaign. That’s more a compliment than a complaint, because it illustrates just how much history is packed into Brands’ latest book...Gripping...Brands’ writing style and his mastery of history make the book an excellent introduction to the time period for newcomers, and a fresh perspective for those already familiar with this chapter in the nation’s history.”
—AP

“Sweeping...An excellent, well-written study—like most of the author’s books, a welcome addition to the literature of westward expansion.”
—Kirkus Reviews *Starred Review*

“Brands is an American treasure: a professional, discerning historian who can write with forceful elegance...His remarkable decision to discuss Indian relations and conflicts via these dual, and dueling, biographies of Sherman and Geronimo yields unexpected inf lections and surprising insights. As narrative history it is pure Brands, and he is a master.”
—James L. Haley, author of Apaches: A History and Culture Portrait

“One was a leader of his people, who fought to preserve their place in the western United States.  The other fought in the Civil War and forced the destruction of the South and eventual victory for the North. Leading historian H. W.  Brands of the University of Texas brings new life to Geronimo and adds new insight into William T. Sherman’s last years. Brands writes a book that no one can set aside if the reader wants to understand two of the leading figures in American history.”
—John F. Marszalek, author of Sherman: A Soldier’s Passion for Order

“Brands describes the horrors of [the Indian Wars] in vivid prose, drawing on conversations and memoirs from the era to document the tragedy.”
—Booklist

“Sweeping...Interesting history for readers and a worthy recounting of the war between Native and Anglo Americans that was fought as western expansion after the Civil War was undertaken.”
—BookReporter