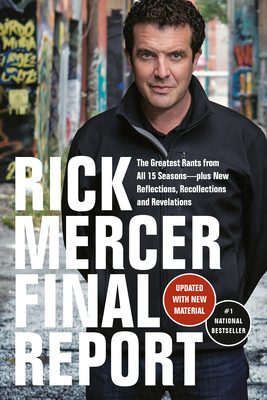 
Special Order—Subject to Availability
Canada's pre-eminent satirical commentator brings down the curtain on his hugely successful show in this instant #1 national bestseller.

Rick Mercer startled the nation when in 2017 he announced that the 15th season of Canada’s most-watched and beloved comedy show the Rick Mercer Report would be the last. As this book reminds us, he quit while he was way, way ahead. Final Report includes blisteringly good rants from the final five seasons and some of the very best rants from the show’s early years. And in three brilliant new essays that include a love letter to Parliament Buildings, how Doug Ford became Ontario premier (hint: it had nothing to do with talent) and how he managed not to freak out in the year after the RMR wrapped, Rick, a recipient of a 2019 Governor General’s Performing Arts Lifetime Artistic Achievement Award, reveals himself as a comic writer and entertainer at the very top of his game.
RICK MERCER co-created and performed on CBC's This Hour Has 22 Minutes, created and starred in Made in Canada, and created and starred in Talking to Americans, the most-watched comedy special in Canadian television history. He went on to host the hugely successful Rick Mercer Report for 15 seasons. Rick was appointed an Officer of the Order of Canada in 2014 for his work with charitable causes and "his ability to inspire and challenge Canadians through humour." He is the co-founder of the Spread the Net campaign. In 2019, he received a Governor General's Performing Arts Lifetime Artistic Achievement Award. He is from Middle Cove, Newfoundland and Labrador.
#1 National Bestseller
Longlisted for the 2019 Stephen Leacock Medal for Humour
A Hill Times Best Book of 2018

"Mercer embodies Canada, but without the smugness." —The Globe and Mail

"Week after week, Mercer continues to delight with his alternately giddy and cutting political humour." —The Canadian Press

"The comedian of choice for viewers who read." —Toronto Life

"[A Nation Worth Ranting About] will make you laugh out loud repeatedly." —The Chronicle Herald

"The most fun I've had in bed for a long time." —Shelagh Rogers, CBC, on Rick Mercer Report: The Book