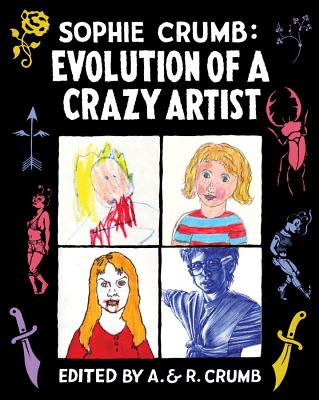 Slipcased limited edition signed by S., R., and A. Crumb, including a signed print: a groundbreaking work of striking originality that charts a young artist's life through her own drawings—from toddlerhood to motherhood.

Sophie Crumb's startlingly expressive drawings track her development as an artist from age two to twenty-eight. Sifting through dozens of their daughter's remarkable sketchbooks, our generation's most celebrated graphic artists have, with their only child, Sophie, now selected more than three hundred paintings and drawings that depict her artistic and psychological maturation. Revealing how an original artistic sensibility is both innate and nurtured, the book features six separate developmental stages, including Sophie's earliest drawings, the elaborate fantasy world of her childhood, her late adolescent rebellion, and her coming of age in the milieu of the Paris circus world and New York's "seventh circle of hell." The drawings from her early twenties—of tattoo artists, dangerous men—reflect a personal anguish that finally ends with her becoming a mother and creating a family of her own. Illuminating and intimate, this book is a dramatic yet subtle statement on the evolution of personality as seen through art. This slipcased limited edition is signed by S., R., and A. Crumb, including a signed print.

Sophie Crumb has collaborated with her parents on Dirty Laundry Comics and has produced her own series, Bellybutton Comix. A practicing tattoo artist, she lives in the south of France with her husband and baby boy, Eli.

Aline Crumb is an American underground comics artist and the author of Need More Love: A Graphic Memoir. She lives in southern France.

Born in Philadelphia, R. Crumb is the author of numerous comic works and one of the pioneers of underground comics and arguably one of the most famous cartoonists in history. His books include The Book of Genesis Illustrated by R. Crumb, and many more. He lives in the south of France with his wife, the artist Aline Kominsky-Crumb.