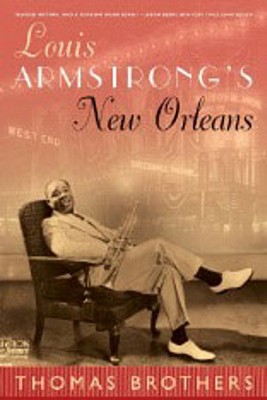 "The best book ever produced about Louis Armstrong by anyone other than the man himself."—Terry Teachout, Commentary

In the early twentieth century, New Orleans was a place of colliding identities and histories, and Louis Armstrong was a gifted young man of psychological nimbleness. A dark-skinned, impoverished child, he grew up under low expectations, Jim Crow legislation, and vigilante terrorism. Yet he also grew up at the center of African American vernacular traditions from the Deep South, learning the ecstatic music of the Sanctified Church, blues played by street musicians, and the plantation tradition of ragging a tune.

Louis Armstrong's New Orleans interweaves a searching account of early twentieth-century New Orleans with a narrative of the first twenty-one years of Armstrong's life. Drawing on a stunning body of first-person accounts, this book tells the rags-to-riches tale of Armstrong's early life and the social and musical forces that shaped him. The city and the musician are both extraordinary, their relationship unique, and their impact on American culture incalculable.

Thomas Brothers is the author of Help! The Beatles, Duke Ellington, and the Magic of Collaboration; Louis Armstrong’s New Orleans; and Louis Armstrong, Master of Modernism, which was a finalist for the Pulitzer Prize. A professor of music at Duke University, he lives with his family in Durham, North Carolina.
Superb history and a rocking good read.
— Jason Berry - New York Times Book Review

Examine[s] the music with the care it deserves.
— Tom Wilmeth - Express Milwaukee