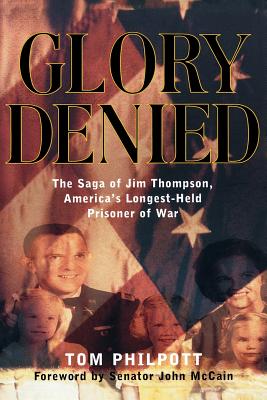 
Not On Our Shelves—Ships in 1-5 Days
On March 26, 1964, barely four months after arriving in Vietnam, Special Forces Captain Floyd "Jim" Thompson was captured by the Vietcong. He would spend the next nine years in jungle cages and dark prison cells, attempting escape five times, and surviving torture, disease, and starvation. When he was finally released in 1973, he returned to a nation he no longer knew -- and to a family that no longer knew him.

Thompson's epic story -- and that of his wife and children, who also paid dearly for his sacrifice -- is brought to life in this searing reconstruction of one man's torturous journey through the unspeakable horrors of war and its aftermath. Weaving together interviews with Thompson and his family; comments from friends, fellow soldiers, and other POWs; and excerpts from service records, medical reports, and intelligence briefings, journalist Tom Philpott creates a moving and compelling portrait of a complex and heroic figure. Combining the rich historical detail of Neil Sheehan's A Bright Shining Lie with the pathos of a James Jones novel, Glory Denied is a monumental work of oral history and a much-needed reminder of how far we have come -- and how far we have yet to travel -- in understanding one of the defining moments of our generation.