Rewriting the Rules of the American Economy: An Agenda for Growth and Shared Prosperity (Paperback) 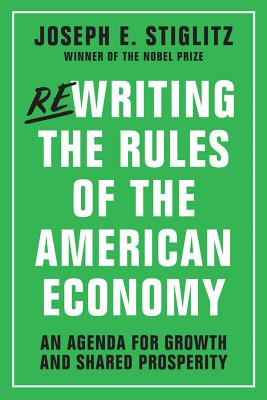 Rewriting the Rules of the American Economy: An Agenda for Growth and Shared Prosperity (Paperback)

It’s time to rewrite the rules—to curb the runaway flow of wealth to the top one percent, to restore security and opportunity for the middle class, and to foster stronger growth rooted in broadly shared prosperity.

Inequality is a choice.

The United States bills itself as the land of opportunity, a place where anyone can achieve success and a better life through hard work and determination. But the facts tell a different story—the U.S. today lags behind most other developed nations in measures of inequality and economic mobility. For decades, wages have stagnated for the majority of workers while economic gains have disproportionately gone to the top one percent. Education, housing, and health care—essential ingredients for individual success—are growing ever more expensive. Deeply rooted structural discrimination continues to hold down women and people of color, and more than one-fifth of all American children now live in poverty. These trends are on track to become even worse in the future.

Some economists claim that today’s bleak conditions are inevitable consequences of market outcomes, globalization, and technological progress. If we want greater equality, they argue, we have to sacrifice growth. This is simply not true. American inequality is the result of misguided structural rules that actually constrict economic growth. We have stripped away worker protections and family support systems, created a tax system that rewards short-term gains over long-term investment, offered a de facto public safety net to too-big-to-fail financial institutions, and chosen monetary and fiscal policies that promote wealth over full employment.

Joseph E. Stiglitz is a Nobel Prize–winning economist and the best-selling author of Globalization and Its Discontents Revisited: Anti- Globalization in the Age of Trump, The Price of Inequality, and Freefall. He was chairman of the Council of Economic Advisers under President Clinton, chief economist of the World Bank, named by Time as one of the 100 most influential individuals in the world, and now teaches at Columbia University and is chief economist of the Roosevelt Institute.
Stiglitz realizes that deepening inequality in our country is not an unlucky act of nature, but a consequence of the policies we have chosen. This lively book suggests a whole menu of policy changes to move us toward a more widely shared prosperity.
— Robert Solow, winner of the Nobel Prize

The secret truth about economic inequality in America: once you look at the issue this way, it’s hard to think of it any other way.
— Time

At a time when 25 hedge fund managers make more than all our nation’s kindergarten teachers combined, it is clear that the rules are rigged in favor of the wealthy few. Joseph Stiglitz has proposed a bold plan to rewrite these rules by rebuilding our economy for the twenty-first century.
— Randi Weingarten, president of the American Federation of Teachers

An aggressive blueprint for rewriting 35 years of policies [that] have led to a vast concentration of wealth among the richest Americans and an increasingly squeezed middle class.
— New York Times