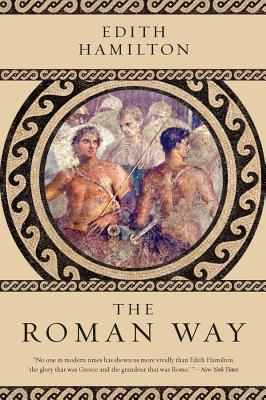 "No one in modern times has shown us more vividly than Edith Hamilton 'the glory that was Greece and the grandeur that was Rome.'" —New York Times

In this now-classic history of Roman civilization, Edith Hamilton vividly depicts Roman life and spirit as they are revealed by the greatest writers of the age. Among these literary guides are Cicero, who left an incomparable collection of letters; Catullus, who was the quintessential poet of love; Horace, who chronicled a cruel and materialistic Rome; and the Romantics: Virgil, Livy, and Seneca. Hamilton concludes her work by contrasting the high-mindedness of Stoicism with the collapse of values as witnessed by the historian Tacitus and the satirist Juvenal.

Edith Hamilton (1867–1963) was made an honorary citizen of Athens because of her writings. She won the National Achievement Award and received honorary degrees from Yale University, the University of Rochester, and the University of Pennsylvania. The author of The Roman Way, Mythology, and other works, she was a member of the American Academy of Arts and Letters.
Filtering the golden essence from the mass of classical literature, [Edith Hamilton] proved how applicable to our daily lives are the humor and wisdom of more than 2,000 years ago.
— New York Times