Rewriting the Rules of the European Economy: An Agenda for Growth and Shared Prosperity (Hardcover) 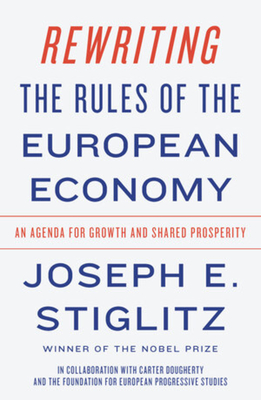 Rewriting the Rules of the European Economy: An Agenda for Growth and Shared Prosperity (Hardcover)

By Joseph E. Stiglitz, Carter Dougherty (With), The Foundation for European Progressive Studies (With)

A companion to his acclaimed work in Rewriting the Rules of the American Economy, Joseph E. Stiglitz, along with Carter Dougherty and the Foundation for European Progressive Studies, lays out the economic framework for a Europe with faster growth that is more equitably shared.

Europe is in crisis. Sluggish economic growth in many countries, widespread income stagnation, and recession have led to severe political and social consequences. Social protections for citizens have been cut back. Governments offer timid responses to deep-seated problems. These economic and political failures have contributed to the rise of extremist parties on the right. Marginalized populations are being made scapegoats for Europe’s woes. But the problems of today’s Europe stem from decisions based on a blind worship of markets in too many areas of policy.

If Europe is to return to an innovative and dynamic economy—and if there is to be shared prosperity, social solidarity, and justice—then EU countries need to break with their current, destructive trajectory. This volume offers concrete strategies for renewal that would also reinvigorate the project of European integration, with fresh ideas in the areas of both macroeconomics and microeconomics, including central banking, public investment, corporate governance and competition policy, social policy, and international trade.

Joseph E. Stiglitz is a Nobel Prize–winning economist and the best-selling author of Globalization and Its Discontents Revisited: Anti- Globalization in the Age of Trump, The Price of Inequality, and Freefall. He was chairman of the Council of Economic Advisers under President Clinton, chief economist of the World Bank, named by Time as one of the 100 most influential individuals in the world, and now teaches at Columbia University and is chief economist of the Roosevelt Institute.

Carter Dougherty is a writer based in Washington, DC, with a deep background in European history and economics, and is an advocate for stronger regulation of Wall Street.

The Foundation for European Progressive Studies is a progressive think tank operating across Europe, collaborating with social democratic organizations continent-wide to tackle today’s European challenges.
A very welcome contribution to the necessary overhaul of the rules of our European economic and monetary union, for more democracy and solidarity. Stiglitz has once again succeeded in combining acute criticism with ambitious yet realistic proposals for solutions
— Pierre Moscovici, former European commissioner for economic and financial affairs, taxation and customs, and minister for finance and economy of France

Rewriting the Rules is a powerful statement from a group of influential writers from both sides of the Atlantic, led by one of the most eminent economists, a Nobel Prize winner and global activist. The ‘rules’ are in opposition to the once-dominant Washington Consensus, but what is most important is that they are gradually making their way into mainstream economics and policy-making. If this continues, then we can really hope to rewrite the rules both in Europe and maybe even in the USA.