People, Power, and Profits: Progressive Capitalism for an Age of Discontent (Paperback) 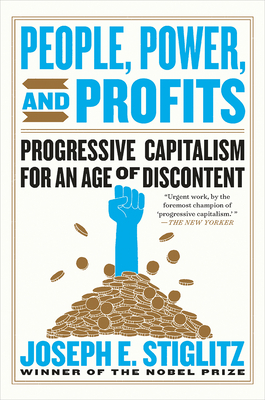 People, Power, and Profits: Progressive Capitalism for an Age of Discontent (Paperback)

“Urgent work, by the foremost champion of ‘progressive capitalism.’ ” —The New Yorker

An authoritative account of the dangers of unfettered markets and monied politics, People, Power, and Profits shows us an America in crisis. The American people, however, are far from powerless, and Joseph Stiglitz provides an alternative path forward through his vision of progressive capitalism, with a comprehensive set of political and economic changes.

Joseph E. Stiglitz is a Nobel Prize–winning economist and the best-selling author of Globalization and Its Discontents Revisited: Anti- Globalization in the Age of Trump, The Price of Inequality, and Freefall. He was chairman of the Council of Economic Advisers under President Clinton, chief economist of the World Bank, named by Time as one of the 100 most influential individuals in the world, and now teaches at Columbia University and is chief economist of the Roosevelt Institute.
The policy shop of every 2020 Democratic candidate for president would be wise to pore over People, Power, and Profits and cherry-pick its best ideas.

Stiglitz offers a comprehensive list of easy-to-understand progressive remedies that will find favor with many readers.
— Library Journal