Super Volcanoes: What They Reveal about Earth and the Worlds Beyond (Hardcover) 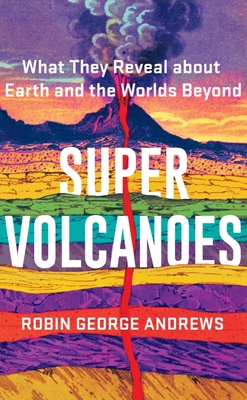 Super Volcanoes: What They Reveal about Earth and the Worlds Beyond (Hardcover)

An exhilarating, time-traveling journey to the solar system’s strangest and most awe-inspiring volcanoes.

Volcanoes are capable of acts of pyrotechnical prowess verging on magic: they spout black magma more fluid than water, create shimmering cities of glass at the bottom of the ocean and frozen lakes of lava on the moon, and can even tip entire planets over. Between lava that melts and re-forms the landscape, and noxious volcanic gases that poison the atmosphere, volcanoes have threatened life on Earth countless times in our planet’s history. Yet despite their reputation for destruction, volcanoes are inseparable from the creation of our planet.

A lively and utterly fascinating guide to these geologic wonders, Super Volcanoes revels in the incomparable power of volcanic eruptions past and present, Earthbound and otherwise—and recounts the daring and sometimes death-defying careers of the scientists who study them. Science journalist and volcanologist Robin George Andrews explores how these eruptions reveal secrets about the worlds to which they belong, describing the stunning ways in which volcanoes can sculpt the sea, land, and sky, and even influence the machinery that makes or breaks the existence of life.

Walking us through the mechanics of some of the most infamous eruptions on Earth, Andrews outlines what we know about how volcanoes form, erupt, and evolve, as well as what scientists are still trying to puzzle out. How can we better predict when a deadly eruption will occur—and protect communities in the danger zone? Is Earth’s system of plate tectonics, unique in the solar system, the best way to forge a planet that supports life? And if life can survive and even thrive in Earth’s extreme volcanic environments—superhot, superacidic, and supersaline surroundings previously thought to be completely inhospitable—where else in the universe might we find it?

Traveling from Hawai‘i, Yellowstone, Tanzania, and the ocean floor to the moon, Venus, and Mars, Andrews illuminates the cutting-edge discoveries and lingering scientific mysteries surrounding these phenomenal forces of nature.

Robin George Andrews is an award-winning science journalist with a PhD in volcanology. His writing has appeared in the New York Times, Atlantic, National Geographic, Scientific American, Atlas Obscura, and other publications. He lives in London, England.
Fascinating.... The science writing is consistently exciting and illuminating and kept me reading into the wee hours.... Using his storytelling skills, Mr. Andrews offers us a solar system resembling a ‘boundless library, one full of books whose words are written in volcanic ink.’
— Robert M. Thorson - Wall Street Journal

Andrews is in awe of his subjects; his zeal is obvious.... his attentive reporting will be enjoyed by both the magma-curious and anyone who just wants to wonder at some of the strangest, strongest forces in the universe.
— Tess Joosse - Scientific American

[Andrews] weaves a path through some of the most important recent eruptions and discoveries.... [and] provides illuminating analogies that capture the uncertainty and unknowns of volcanology.
— Erik Klemetti - Washington Post

Andrews takes readers on a Cook’s tour of volcanoes near and far, fuelling a broader curiosity about our planet and its place in the solar system.... He is at his best when discussing those who live in the shadow of volcanoes and, especially, the scientists who study them.... What volcanoes provide is an invitation to explore and wonder, with experts, at the stories they tell, as well as the possibility of looking at the Earth with new eyes. Supervolcanoes may be rare, but as Andrews makes clear, super volcanoes are everywhere.
— Andrew H. Knoll - Times Literary Supplement

Delightful. Robin George Andrews brings his expertise and enthusiasm to bear on this explosive subject, vividly connecting the Hadean underworld of magma to the human one above, and inviting the reader into the ongoing quest to understand volcanoes’ secrets—on Earth and far beyond.
— Peter Brannen, author of The Ends of the World: Volcanic Apocalypses, Lethal Oceans, and Our Quest to Understand Earth’s Past Mass Extinctions

Dr. Robin Andrews takes us on an explosive, gassy, messy adventure decoding the epic hot mess that is volcanism on Earth and far beyond. If volcanoes have ever triggered even a minor explosion of fear, excitement, awe, confusion, or curiosity for you: Read. This. Book.
— Dr. Janine Krippner, volcanologist, Smithsonian Institution Global Volcanism Program

Andrews takes us on the adventure of a geological lifetime in Super Volcanoes, a masterwork which explores the engines of our world and of those throughout the solar system. We do not go alone on this epic journey, we are accompanied by those who have shared with us their colorful lived experiences and expertise which, when combined with a molten rock theme, means this is certainly no cold, hard science piece, but one of great humanity and scientific depth.

Dr. Robin George Andrews wields the dual instruments of scientific training and journalistic curiosity with expert precision in Super Volcanoes. His skillful blend of storytelling and science fact sheds light into the dark crevasses of the human psyche, so often primed to fear volcanoes—yet another misunderstood feature of our natural world. Andrews’s work gives voice to the wonder, the devastation, and the awe of being human in a world shaped by forces far outside of our control, yet still tantalizingly within reach for the scientists brave enough to heed the call of the volcanic unknown.

— Jess Phoenix, volcanologist and author of Ms. Adventure: My Wild Explorations in Science, Lava, and Life

Enlightening.... Andrews does a superb job making complex geology accessible to more casual readers, and offers vivid descriptions of the forces behind both active and ancient volcanoes. As entertaining as it is informative, this is science writing done right.
— Publishers Weekly, starred review

Like the charismatic time-traveling hero of [Doctor Who], this book by science journalist Andrews escorts readers on an adventure through space and time to the many volcanoes inhabiting this world and beyond.... With references to pop culture ... and a literary flair, this is the Baedeker of volcanoes, guiding readers through the world of volcanology.
— Library Journal, starred review

A fine introduction to a spectacular geological phenomenon.... [a] fascinating scientific adventure. Everything you ever wanted to know about volcanoes in expert hands.
— Kirkus