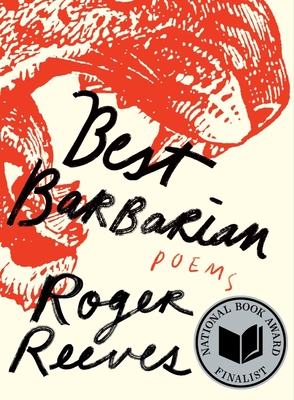 Longlisted for the PEN/Voelcker Award for Poetry Collection

The poems in Best Barbarian roam across the literary and social landscape, from Beowulf’s Grendel to the jazz musician Alice Coltrane, from reckoning with immigration at the U.S.–Mexico border to thinking through the fraught beauty of the moon on a summer night after the police have killed a Black man.

Daring and formally elegant, Best Barbarian asks the reader: “Who has not been an entryway shuddering in the wind / Of another’s want, a rose nailed to some dark longing and bled?” Reeves extends his inquiry into the work of writers who have come before, conversing with—and sometimes contradicting—Walt Whitman, James Baldwin, Sappho, Dante, and Aimé Césaire, among others. Expanding the tradition of poetry to reach from Gilgamesh and the Aeneid to Drake and Beyoncé, Reeves adds his voice to a long song that seeks to address itself “only to freedom.”

Best Barbarian asks the reader to stay close as it plunges into catastrophe and finds surprising moments of joy and intimacy. This fearless, musical, and oracular collection announces Roger Reeves as an essential voice in American poetry.

Roger Reeves is the author of King Me and the recipient of a National Endowment for the Arts fellowship and a Ruth Lilly and Dorothy Sargent Rosenberg Fellowship from the Poetry Foundation, among other honors. He lives in Austin, Texas.
Best Barbarian, Roger Reeves’s terrific second collection, eruditely sets out to unite the Western literary canon with its omissions and oppressions... What I find most moving in this collection is the way fatherhood frames Reeves’s sense of the future and his reworking of the past.

[A] substantial and prodigiously intertextual new collection... Names, quotes, and allusions [are] fundamental elements of the warp and weft of the net of Reeves’s verse, and his own art is both adroit and capacious enough to probe or connect, to complicate or amplify all he catches there... Amid the brutalities of abuse, death, and decay, these poems both apprehend and enact a sometimes terrifying beauty.
— Heather Green - Poetry Foundation

Roger Reeves conjures the losses—no, the thefts—at the root of the American story. Best Barbarian is a revelation and a form of reparation.

Best Barbarians is a twenty-first-century masterpiece. Borrowing and turning on its head the Western canon’s repeated warnings of civilization’s fall, Roger Reeves counters that the apocalypse ran contiguously with the inception and height of Western civilization because the white man’s rise was contingent upon the destruction of Black personhood. From that perspective, Reeves sees America as a necropolis to which he leads us—like Virgil—down into the underworld, where we meet the shades of Emmett Till, Oya, and Ezra Pound, among others. Best Barbarians is rich, intertextual, brilliant, and unforgettable.

I cannot overstate the brilliance of Roger Reeves. A sentence inside a Reeves poem is a score of breath; a scripture with texture and subtext; a tightrope of expansive, existential syntax. Best Barbarian is a monumental and elegiac tour de force. Peerless and unprecedented, it is one of the best books I’ve read in years.

From Grendel to Gilgamesh, Best Barbarian reviews and retells the most ancient of stories so that Roger Reeves can tell his own. The capaciousness of these elegiac poems, their Whitmanian need to hold and see it all, mirrors this speaker’s need to be known fully as a black father, a man in love, a surviving citizen, a son to his mother, and an investigator of his father’s whereabouts even after death. This book is an education on this history of the soul.

Best Barbarian is a wide-ranging, capacious, and deeply felt meditation on ruptures, the violences enacted across time and space, where myth and history collide. Through dazzling riffs and leaps of imagination across linguistic registers, Roger Reeves offers an alchemy for repair. The sheer musicality of the language—the way resilience and love sing—makes a once-broken thing even more beautiful.