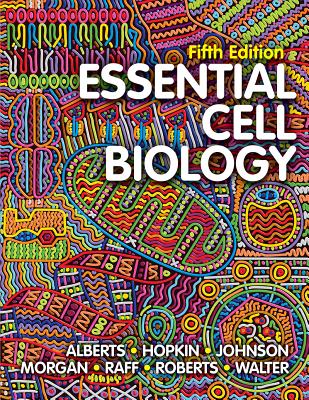 This text features lively, clear writing and exceptional illustrations, making it the ideal textbook for a first course in both cell and molecular biology. Thoroughly revised and updated, the Fifth Edition maintains its focus on the latest cell biology research. For the first time ever, Essential Cell Biology will come with access to Smartwork5, Norton’s innovative online homework platform, creating a more complete learning experience.

Bruce Alberts received his PhD from Harvard University and is the Chancellor’s Leadership Chair in Biochemistry and Biophysics for Science and Education, University of California, San Francisco. He was the editor in chief of Science magazine from 2008 until 2013, and for 12 years he served as president of the U.S. National Academy of Sciences (1993–2005).

Karen Hopkin received her PhD in biochemistry from the Albert Einstein College of Medicine and is a science writer in Somerville, Massachusetts. She is a regular columnist for The Scientist and a contributor to Scientific American's daily podcast, "60-Second Science."

Alexander Johnson received his PhD from Harvard University and is a professor of microbiology and immunology at the University of California, San Francisco. He is a member of the National Academy of Sciences.

David Morgan received his PhD from the University of California, San Francisco, and is a professor in the Department of Physiology as well as the vice dean for research for the School of Medicine. Dave is a fellow of the Royal Society of London.

Martin Raff received his MD from McGill University and is emeritus professor of biology at the Medical Research Council Laboratory for Molecular Cell Biology at University College London. He is a foreign member of the National Academy of Sciences.

Keith Roberts received his PhD from the University of Cambridge and was deputy director of the John Innes Centre, Norwich. He is emeritus professor at the University of East Anglia. Keith was recipient of the Order of British Empire for his service to sciences.

Peter Walter received his PhD from the Rockefeller University in New York, is a professor in the Department of Biochemistry and Biophysics at the University of California, San Francisco, and is an investigator at the Howard Hughes Medical Institute. He is a member of the National Academy of Sciences.