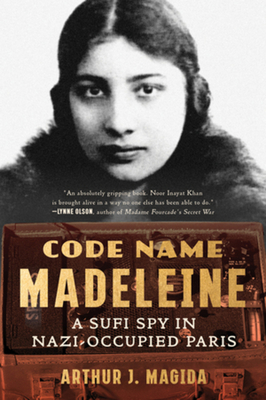 A CrimeReads Most Anticipated Book of 2020

A Padma Lakshmi Favorite Read of 2021

Raised in a lush suburb of 1920s Paris, Noor Inayat Khan was an introspective musician and writer, dedicated to her family and to her father’s spiritual values of harmony, beauty, and tolerance. She did not seem destined for wartime heroism. Yet, faced with the evils of Nazi violence and the German occupation of France, Noor joined the British Special Operations Executive and trained in espionage, sabotage, and reconnaissance. She returned to Paris under an assumed identity immediately before the Germans mopped up the Allies’ largest communications network in France. For crucial months of the war, Noor was the only wireless operator there sending critical information to London, significantly aiding the success of the Allied landing on D-Day. Code-named Madeleine, she became a high-value target for the Gestapo. When she was eventually captured, Noor attempted two daring escapes before she was sent to Dachau and killed just months before the end of the war.

Carefully distilled from dozens of interviews, newly discovered manuscripts, official documents, and personal letters, Code Name Madeleine is both a compelling, deeply researched history and a thrilling tribute to Noor Inayat Khan, whose courage and faith guided her through the most brutal regime in history.

Arthur J. Magida is an award-winning journalist and the author of The Nazi Séance and The Rabbi and the Hit Man. He lives in Baltimore, Maryland.
An engrossing tale of an amazing woman and her immense courage in the face of evil.
— Alex Kershaw, author of Avenue of Spies

[Code Name Madeleine] sheds new light on a heroine.… Her plight mirrors our own times.

Noor Inayat Khan is a woman for our age: a true heroine who faced down evil when she saw it and sacrificed her life for the cause of freedom. Arthur J. Magida’s biography is both a thrilling spy story and a moving portrait of her courage.
— Amanda Foreman, author of A World on Fire

What a story this is. Magida tells it very well.
— Jon M. Sweeney - America magazine

Captures the spirit of this very courageous woman who was not designed for wartime heroism.
— KALW-FM, San Francisco

An intimate and compelling portrait of the most extraordinary undercover agent of World War II. Noor Inayat Khan’s story is one of courage, heroism, and tragedy: Magida’s fascinating biography delves deep into the life of this devout Sufi woman whose moral imperative was to fight fascism at all costs—even if that meant putting herself in mortal danger.
— Giles Milton, author of Soldier, Sailor, Frogman, Spy

Thanks to the dexterous work of Arthur Magida, Noor Inayat Khan finally takes her rightful place in world history. Free-spirited, glamorous, devout—embodying a life of mysticism and the arts—the only Indian woman spy fighting fascism in the golden age of Euro-American spying.
— Ruby Lal, author of Empress: The Astonishing Reign of Nur Jahan

A singular World War II tale highlights the bravery of a Sufi mystic’s daughter who sacrificed a peaceful life in France to become a secret agent for the British during the war. Magida fashions a highly original biography of the short, brave life of Noor Inayat Khan (1914–1944)… A harrowing thriller in which a young woman’s ‘joy of sacrifice’ turned to tragedy.
— Kirkus Reviews