The Will to Power (Paperback) 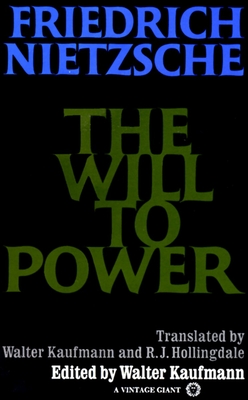 The Will to Power (Paperback)


On Our Shelves Now at:
Represents a selection from Nietzche's notebooks to find out what he wrote on nihilism, art, morality, religion, and the theory of knowledge, among others.

Nietzsche's notebooks, kept by him during his most productive years, offer a fascinating glimpse into the workshop and mind of a great thinker, and compare favorably with the notebooks of Gide and Kafka, Camus and Wittgenstein.  The Will to Power, compiled from the notebooks, is one of the most famous boooks of the philosophy.  Here is the first critical edition in any language.
Down through the Nazi period The Will to Power was often mistakenly considered to be Nietzche's crowning systematic labor; since World War II it has frequently been denigrated.  In fact, it represents a stunning selection from Nietzsche's notebooks, in a a topical arrangement that enables the reader to find what Nietzsche's wrote on a variety of subjects.
Walter Kaufmann, in collaboration with R. J. Holilngdale, brings to this volume his unsurpassed skills as a Nietzsche translator and scholar. Professor Kaufmann has included an approximate date of each note. His running footnote commentary offers information needed to follow Nietzsche's train of thought, and indicates, among other things, which notes were eventually superseded by later formulations.  The comprehensive index serves to guide the reader to the extraordinary riches of this book.
The philosopher Friedrich Nietzsche was born in Prussia in 1844. After the death of his father, a Lutheran minister, Nietzsche was raised from the age of five by his mother in a household of women. In 1869 he was appointed Professor of Classical Philology at the University of Basel, where he taught until 1879 when poor health forced him to retire. He never recovered from a nervous breakdown in 1889 and died eleven years later. Known for saying that “god is dead,” Nietzsche propounded his metaphysical construct of the superiority of the disciplined individual (superman) living in the present over traditional values derived from Christianity and its emphasis on heavenly rewards. His ideas were appropriated by the Fascists, who turned his theories into social realities that he had never intended.