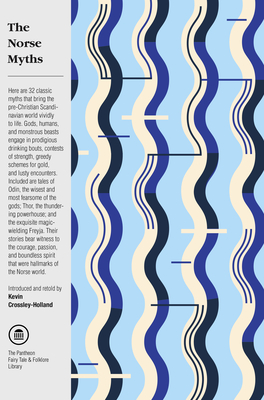 
Not On Our Shelves—Ships in 1-5 Days
With black-and-white drawings throughout, here are thirty-two classic myths that bring the pre-Christian Scandinavian world to life and bear witness to the courage, passion, and boundless spirit that were hallmarks of the Norse world.

Gods, humans, and monstrous beasts engage in prodigious drinking bouts, contests of strength, greedy schemes for gold, and lusty encounters. Included are tales of Odin, the wisest and most fearsome of all the gods; Thor, the thundering powerhouse; and the exquisite mafic-wielding Freyja.
KEVIN CROSSLEY-HOLLAND is a poet, translator, playwright, and award-winning author of children's books. Honors he has received include the Guardian Children's Fiction Award and the Tir Na n-Og Award. His King Arthur trilogy has sold more than a million copies and has been translated into twenty-five languages. An Honorary Fellow of St. Edmund Hall, Oxford, and a Fellow of the Royal Society of Literature, he lives in East Anglia.
“Kevin Crossley-Holland retells the Norse myths in clear, attractive prose ... An excellent introduction, notes, and a glossary provide mythological and historical backgrounds and suggest parallels with myths in other parts of the world.”
—The Denver Post