Too Many Songs by Tom Lehrer: With Not Enough Drawings by Ronald Searle (Paperback) 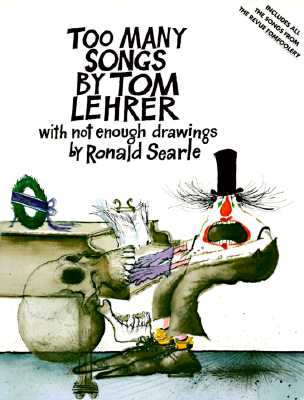 Too Many Songs by Tom Lehrer: With Not Enough Drawings by Ronald Searle (Paperback)


Special Order—Subject to Availability
The subversive songs of Tom Lehrer, the sardonic piano-wielding fugitive from Harvard, have corrupted generations of Americans since he first began recording and performing in the 1950s. His uniquely depraved wit has been forced again on an unsuspecting public' via Tom Foolery, the stage revue based on his ever-trenchant observation of the American scene. This new songbook, with old favorites unavailable for years as well as never-published songs, is the most comprehensive ever assembled. It contains the words, tunes, piano accompaniments, and guitar chords for these thirty-four classics:

The Irish Ballad
Fight Fiercely, Harvard!
Be Prepared
The Old Dope Peddler
The Wild West Is Where I
Want to Be
I Wanna Go Back to Dixie
Lobachevsky
The Hunting Song
I Hold Your Hand in Mine
My Home Town
L-Y
When You Are Old and Gray
The Wiener Schnitzel Waltz
Poisoning Pigeons in the Park
A Christmas Carol
Bright College Days
In Old Mexico
She's My Girl
The Elements
The Masochism Tango
National Brotherhood Week
MLF Lullaby
The Folk Song Army
Smut
Send the Marines
New Math
Pollution
So Long, Mom
Who's Next?
Wemher Von Braun
We Will All Go Together
When We Go
I Got It from Agnes
Silent E
The Vatican Rag
Thomas Lehrer is an American singer-songwriter, satirist, pianist, and mathematician. Although best known for the pithy, humorous songs he recorded in the 1950s and 1960s, Lehrer discontinued his musical career in the early 1970s. His cult following led to a hit London revival of his music called Tom Foolery in the early 1980s and his songs were re-released digitally as recently as 2010.

Lehrer's academic career spanned fifty years, teaching at MIT, Harvard, Wellesley, and the University of California (Santa Clara). Although he also taught political science and liberal arts, his main focus was on mathematics, from which he retired in 2001. Lehrer has also lectured on mathematics and musical theater.