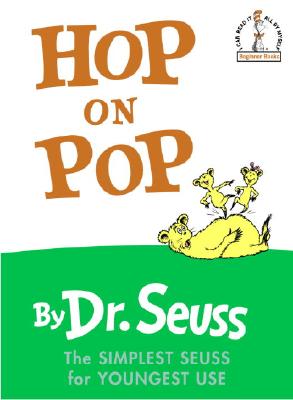 
Not On Our Shelves—Ships in 1-5 Days
Loved by generations, this “simplest Seuss for youngest use” is a Beginner Book classic. See Red and Ned and Ted and Ed in a bed. And giggle as Pat sits on a hat and on a cat and on a bat . . . but a cactus? Pat must NOT sit on that! This classic Beginner Book makes an ideal gift for Seuss fans and is an especially good way to show Pop some love on Father’s Day!

Originally created by Dr. Seuss, Beginner Books encourage children to read all by themselves, with simple words and illustrations that give clues to their meaning.

"Combines phonics and word recognition, making sounds and letters recognizable. Highly recommended."--(starred) School Library Journal.
THEODOR SEUSS GEISEL—aka Dr. Seuss—is one of the most beloved children’s book authors of all time. From The Cat in the Hat to Oh, the Places You’ll Go!, his iconic characters, stories, and art style have been a lasting influence on generations of children and adults. The books he wrote and illustrated under the name Dr. Seuss (and others that he wrote but did not illustrate, including some under the pseudonyms Theo. LeSieg and Rosetta Stone) have been translated into thirty languages. Hundreds of millions of copies have found their way into homes and hearts around the world. Dr. Seuss’s long list of awards includes Caldecott Honors for McElligot’s Pool, If I Ran the Zoo, and Bartholomew and the Oobleck, the Pulitzer Prize, and eight honorary doctorates. Works based on his original stories have won three Oscars, three Emmys, three Grammys, and a Peabody.