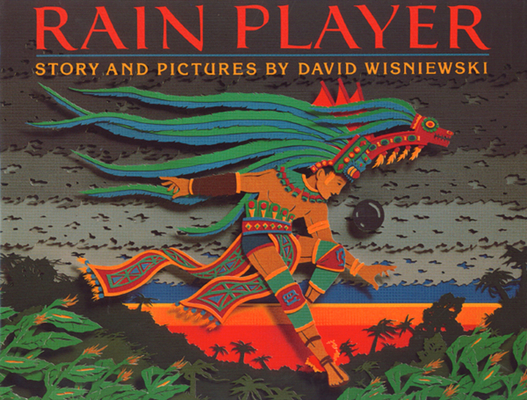 
Not On Our Shelves—Ships in 1-5 Days
The ancient Mayan belief that the future was divinely decreed and could not be changed is the basis for this original tale of a boy who must defeat the Rain God in a ball game to save his people from disaster. Mayan art and architecture were the inspiration for the spectacular cut-paper artwork.
David Wisniewski (wiz-NESS-key) was born in Middlesex, England, in 1953. After training at Ringling Brothers and Barnum & Bailey Clown College, he spent three years as a clown, designing and constructing his own props, costumes, and gags. He was subsequently hired by his future wife, Donna, as a performer with a traveling puppet theatre. Married six months later, the Wisniewskis started their own troupe, Clarion Shadow Theatre, specializing in shadow puppetry. In the course of creating the plays, puppets, and projected scenery, Mr. Wisniewski evolved the storytelling techniques and art skills that eventually led to his picture books with their unique cut-paper illustrations. His retelling of GOLEM was awarded the 1997 Caldecott Medal. David Wisniewski died in 2002 in the Maryland home he shared with his wife and two children.
"The visual excitement of these pictures gives the book immediate and lasting appeal." Booklist, ALA, Starred Review