Who Was Michelangelo? (Who Was?) (Hardcover) 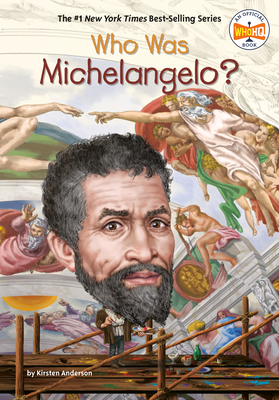 Who Was Michelangelo? (Who Was?) (Hardcover)


Not On Our Shelves—Ships in 1-5 Days
Travel to Renaissance Italy and learn about the young apprentice who went on become a true master, and one of the most beloved sculptors and painters of all time in this addition to the #1 New York Times Best-Selling Who Was? series!

Michelangelo created some of the world's most recognizable art, from the statue of David to the intricate ceiling fresco of the Sistine Chapel. Beyond his well-known painting and sculpting, he was a gifted poet and architect. Young readers can learn about the entirety of Michelangelo's life, from his time as a young apprentice, his relationships with several Catholic popes and the Medici family, to his unwillingness to stop working into his late eighties. A perfect read for art lovers and fans of the Renaissance.
Kirsten Anderson is a writer and actress who lives in New York City with her charming Pomeranian, Sunflower. She has written several biographies for children, including Who Was Andy Warhol? and Who Is Kamala Harris?