The Adventures of Honey & Leon (Hardcover) 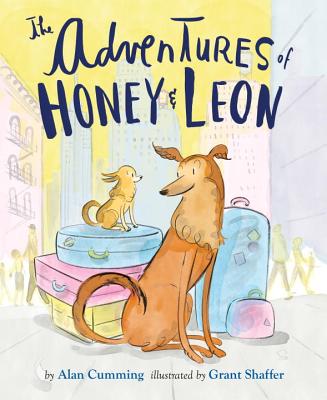 The Adventures of Honey & Leon (Hardcover)

Honey and Leon are rescue mutts who love their dads very much. But their dads often have to go away on glamorous and important business, which worries the dogs. Honey and Leon are done staying home and fretting—they’re off on a dad-protecting adventure! Careful to remain incognito, the two pups shadow their dads on a trip across the sea, keeping them out of danger at every turn! How did they survive without Honey and Leon’s protection for this long?!

GRANT SHAFFER is an artist whose work has appeared in the New Yorker, the New York Times, and Interview magazine, among others. He is the illustrator of Three Magic Balloons by Julianna Margulies and her father, Paul Margulies. He lives in Manhattan with his husband.
Young listeners will enjoy finding the pups in each picture and wonder if their own pets might wish to secretly travel along to watch over them. Shaffer's watercolors are foolishly charming on every page and add sight gags and in-jokes for caregivers for extra fun. A fine family fable and a perfect story to read to a devoted dog. Kirkus, June 17


It’s a fun premise, breezily told, and Shaffer’s fluid, pastel-hued watercolors exude a cheery élan, whether the dogs are expertly hailing a cab or wearing sunglasses while doing surveillance on their owners at the movies.PW