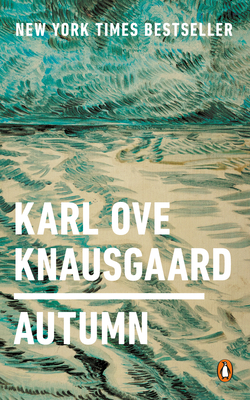 
On Our Shelves Now at:
The New York Times bestseller.

From the author of the monumental My Struggle series, Karl Ove Knausgaard, one of the masters of contemporary literature and a genius of observation and introspection, comes the first in a new autobiographical quartet based on the four seasons.

I want to show you our world as it is now: the door, the floor, the water tap and the sink, the garden chair close to the wall beneath the kitchen window, the sun, the water, the trees. You will come to see it in your own way, you will experience things for yourself and live a life of your own, so of course it is primarily for my own sake that I am doing this: showing you the world, little one, makes my life worth living.

Autumn begins with a letter Karl Ove Knausgaard writes to his unborn daughter, showing her what to expect of the world. He writes one short piece per day, describing the material and natural world with the precision and mesmerising intensity that have become his trademark. He describes with acute sensitivity daily life with his wife and children in rural Sweden, drawing upon memories of his own childhood to give an inimitably tender perspective on the precious and unique bond between parent and child. The sun, wasps, jellyfish, eyes, lice--the stuff of everyday life is the fodder for his art. Nothing is too small or too vast to escape his attention. This beautifully illustrated book is a personal encyclopaedia on everything from chewing gum to the stars. Through close observation of the objects and phenomena around him, Knausgaard shows us how vast, unknowable and wondrous the world is.
Karl Ove Knausgaard’s first novel, Out of the World, was the first ever debut novel to win the Norwegian Critics’ Prize and his second, A Time for Everything, was widely acclaimed. The My Struggle cycle of novels has been heralded as a masterpiece wherever it has appeared, and the first volume was awarded the prestigious Brage Prize.


Vanessa Baird was born in Oslo, where she now lives and works. She has an MA from the Royal College of Art, London, and in 2015 she won the Lorck Schive Art Prize, Norway’s biggest contemporary art prize.
“Knausgaard’s art can still seem a kind of magic. How does he take the plainest things, in the plainest language, and make them feel so alive?…The days, the months, the hovering presence of the daughter-to-be, charge the objects they delimit with a mortal urgency…Day by day, radiantly, the mission succeeds. For even the familiarity and foreignness that box us in, or out, will bend to a sovereign art. . . for a little while, if only in the mind, we get to have our apple and eat it too.”—New York Times Book Review

“Simone Weil wrote that ‘attention, taken to its highest degree, is the same thing as prayer’ — and so it is here. Loose teeth, chewing gum, it all becomes noble, almost holy, under Knausgaard’s patient, admiring gaze. The world feels repainted…This book is full of wonders.” —The New York Times

“VERDICT- This is a more accessible entry point to Knausgaard than his series of autobiographical novels (My Struggle), which is a boon for newcomers. For those familiar with his earlier work, by focusing on the world outside himself, he remains fresh and oftentimes surprising.” —Library Journal

“Stuck in line? Turn to page 123. Read the two-page (1 minute, 45 seconds) chapter, “Infants,” on what is arguably life’s greatest joy. Looking up, you’ll love that you’re in the holiday crush. Well, no. But it’s a damn fine reverie.” — Men’s Health

“Karl Ove Knausgaard frames aging here as a kind of descent into Buddhism: the mindful enlightenment of marinating in the now. His new book is, accordingly, a series of short meditations on everyday things like plastic bags, frogs and war. (‘War is both the simple shape of the arrowhead and the complicated life that it annihilates.’) I happened to turn 40 last week, and Knausgaard’s claim rings true for me.”— New York Times Magazine

“It’s a sentimental week for parent readers. Fans of Karl Ove Knausgaard’s sprawling and often dark six-volume autobiographical novel, ‘My Struggle,’ might be surprised to find the author showing his short-and-sweet side in ‘Autumn,’ a slender book of essays about the material world addressed to his daughter.” — New York Times, 10 Books We Recommend This Week

“In these secular meditations, Knausgaard scratches away at the ordinary to reach the sublime — finding what’s in the picture, and what’s hidden.” —Washington Post

“For all his rapturous passages of ecstasy and agony, Karl Ove Knausgaard can also make you laugh … Autumn glows.” — The Economist

“Even more than in “My Struggle,” he seems to inhabit every age simultaneously: He is boy, adolescent, and father at once…. If hard truths insist on hiding in the deep, these essays suggest, a hand-line will do as well as a drift net to haul them in.”—The Boston Globe

“In his new book, Autumn, the first in a seasonal quartet, Knausgaard casts his gaze outward, crafting a lyrical collage of mini essays and letters to his unborn daughter.” — O Magazine

“The most surprising thing about Autumn, the latest book from Norwegian literary superstar Karl Ove Knausgaard, is how tender it is. . . The spirit of that love animates this gentle, thoughtful book: love both for Knausgaard’s unborn daughter and for finding elements of the transcendent in the mundane. It’s tender, intimate, and lovely.”— Vox

“The joys of one of the world’s great living writers distilled.”— GQ.com

“With a Nordic half-wink of self-parody. No one dotes on details like Knausgaard.”— Vulture.com

“Knausgaard is an acute, sometimes squirmingly honest analyst of domesticity and his relationship to his family. . ....he figures it out with the sharp radiance that is his gift.” —Newsweek

“Knausgaard can take the breath away, his compressed vignettes delivering the same emotional charge as longer sequences from his previous work. . . this first volume of the Seasons Quartet quietly illuminates Knausgaard’s profound gift for making the reader see the world in fresh and unpredictable ways.”—The Guardian

"Summer ends with one of the sweetest reading surprises of the year…unexpected, tender, intense, and persuasive…I encourage you to spend your autumn reading it."” —The Philadelphia Inquirer

“Knausgaard covers fingers, bottles, infants, badgers, cars, loneliness, experience, lice, oil tankers, flies, vomit, dawn and much more, offering both humour and unpredictable logic. . . This book is important as it lays bare the endless sources of inspiration for one of the world’s most successful writers of fiction. Reading this book is a tour through the fecund mind of Knausgaard.” —Open the Magazine

“Yes, this guy writes a ton. His massive, multivolume autobiography My Struggle is regarded as variously notorious or brilliant. But what a sweet, surprising, short collection of essays this is! Lie on the beach, sun beating down, and read about the season to come.” —Philadelphia Tribune

“The great pleasure of “Autumn” is in watching how Knausgaard starts in commonplace observations — ‘of all the things we do, pissing is one of the most routine’ — but then moves unexpectedly toward surprising conclusions. . . I’ll look forward to “Winter,” “Spring” and “Summer.” —San Francisco Chronicle

“For those seeking. . . a moment of contemplative peace, the Norwegian writer Karl Ove Knausgaard’s new book will help…Knausgaard admires Madame Bovary above all other novels, saying Flaubert’s sentences ‘are like a rag rubbed across a windowpane encrusted with smoke and dirt which you have long since grown accustomed to seeing the world through.’ Autumn performs the same task.” —Toronto Star

“This is not Knausgaard-lite; in crisp, imaginative bits of prose, he shakes up complacency and invites us to look again — no bromides here. The overriding dichotomy is that the year is dying out and, at the same time, a baby is growing in utero and reaching out her little hand… By writing about his family and their year of seasons, Knausgaard rescues them from the invisible pack.” – The Post and Courier

“What truly unites these pieces is Knausgaard's sensibility, which is one part Montaigne (an urge to address big issues), one part Nicholson Baker (an eye for picayune detail), and one part Annie Dillard (an admiration for nature and an elegant prose style)… A call to pay closer attention to the routine stuff in our lives and to allow ourselves to be thunderstruck by their beauty.” —Kirkus Reviews (starred)

“Novelist Knausgaard (My Struggle) eloquently expresses the delights, rewards, and insights of looking closely in this, the first of a projected quartet of autobiographical volumes based on the four seasons. …His writing encourages the reader to see the connections between quotidian things and the bigger picture and to appreciate both continuity and change. Autumn hums in the background as apple trees flourish and days get darker, and one looks forward to what associations he will uncover in the remaining seasons of the year.” —Publishers Weekly

“Knausgaard has a gift for making the quotidian seem compelling. . . .Whether he’s writing about a rainstorm (“the sound of thun­der always heightens the sense of being alive”) or teeth (“miniature white towers in the mouth”), the scrutiny Knausgaard applies to everyday objects renews them for the reader.”—Bookpage

”I got through book two of My Struggle, which became my insomnia go-to; Karl Ove Knausgaard’s account of becoming a father and at the same time a writer I found deeply affecting, especially as these bolts of bliss burst through his usual overcast of melancholy. I also loved Autumn, his book of short essays about the eruptions of wonder in everyday life. What’s great about liking Knausgaard is you can be sure there’s always more where that came from.” — Michael Pollan