The Long Game: A Memoir (Paperback) 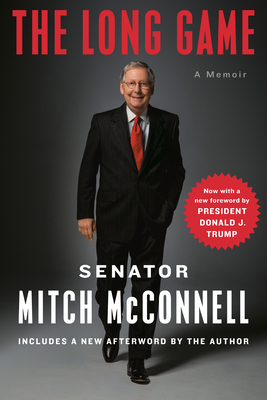 The Long Game: A Memoir (Paperback)

Now in paperback with a foreword by President Donald J. Trump, Senate Majority Leader Mitch McConnell's memoir shows how one of the most successful public figures of our time has worked to advance conservative values in Washington.

Under Mitch McConnell’s famously quiet and strategic leadership, Republicans in the Senate have seen win after win—from tax cuts and deregulation to major improvements for veterans, farmers, and our national defense. In 2018, President Donald Trump dubbed McConnell “the greatest leader in history”—and even his harshest critics on the Left acknowledge his skill.

Now with a new foreword by President Trump and an afterword that details McConnell’s friendship with Supreme Court Justice Antonin Scalia, this paperback edition of McConnell’s memoir reveals the backdrop of his decision not to fill Scalia’s vacant seat until after the 2016 presidential election. Of this decision, New York Times chief Washington correspondent Carl Hulse wrote that “McConnell not only preserved a Supreme Court seat, he elected Donald Trump president.”

The years of the McConnell-led Senate have proved that lasting change can only be won by playing the long game. Leading up to the 2020 election, when the system of government our Founding Fathers created will again be threatened by the Left, this book is necessary reading for anyone who wants to avoid repeating the mistakes of our recent past.

MITCH McCONNELL is the longest-serving US Senate Republican leader and longest-serving senator from Kentucky. He has represented the Commonwealth in the upper chamber since January 1985 and has been Senate majority leader since January 2015. Prior to that, he was leader of the Senate Republican minority for nearly a decade. Senator McConnell has been described by Frank Luntz as having “had a bigger impact on the United States Senate than any senator in my lifetime” and by one journalist as being “arguably the most influential Senate majority leader since Lyndon Johnson.” Twice he has been selected by Time magazine as one of the 100 Most Influential People. He has three daughters and is married to Elaine Chao, the secretary of transportation.

"From Alabama country boy bedridden for two years with polio to Majority Leader of the U.S. Senate is a remarkable journey. Mitch McConnell tells this quintessentially American story with lucid prose and refreshing candor. A most valuable historical contribution to the politics of our time."
—Charles Krauthammer, author of Things That Matter

"Mitch McConnell’s The Long Game is a warm, candid, and captivating story of a young boy who conquered polio, loved the Brooklyn Dodgers, and set his sights on becoming a ballplayer before finding his life’s calling in politics. The steady upward climb from high school president to office boy in the Senate mailroom, from county judge to majority leader, is told with insight, humor, and telling detail."
—Doris Kearns Goodwin, presidential historian

"With candor and a sure sense of history--both of the nation's and of the Senate--Mitch McConnell has written an engaging and compelling memoir of a life spent in the arena. Readers seeking to understand where we are, how we got here, and what might come next will find this book at once entertaining and essential."
—Jon Meacham, author of Destiny and Power

"Mitch McConnell's absorbing memoir arrives at a moment when the nation needs and deserves what his book provides--a mature defense of the political profession by one of its best practitioners. His career in one of America's most complex institutions demonstrates that politics is both an individual craft and a team sport. His readers will acquire deepened respect for him, for the Senate and for the patience that politics requires and rewards."
—George F. Will, author of A Nice Little Place on the North Side

"Sen. McConnell has been a tough foe of President Obama and the Democrats, but in this revealing memoir he also takes on the tea party and other purists for engaging in futile gestures and preferring to make a point rather than a difference. Even if you don't agree with his politics, you'll find a wealth of valuable lessons to learn from his journey."
—Walter Isaacson, author of Steve Jobs and president and CEO of the Aspen Institute

"Mitch McConnell’s impressive career in the U.S. Senate demonstrates the power of strong leadership coupled with patience and perseverance. The Long Game is a fascinating and enjoyable read that vividly depicts the origins of McConnell’s tenacity and commitment to public service, and shares how-to secrets from an American statesman."
—Arthur Brooks, president of the American Enterprise Institute