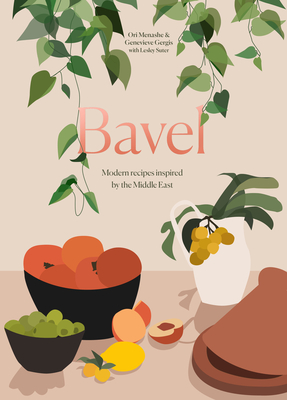 
In Stock—Click for Locations
From the acclaimed chefs behind award-winning Los Angeles restaurant Bavel comes a gorgeous cookbook featuring personal stories and more than eighty recipes that celebrate the diversity of Middle Eastern cuisines.

NAMED ONE OF THE BEST COOKBOOKS OF THE YEAR BY TIME OUT • “Ori and Genevieve manage to pull off a style of cooking that is both familiar (and therefore comforting) but also new (and therefore fresh and exciting). This is the sort of food I could live on.”—Yotam Ottolenghi

When chef Ori Menashe and pastry chef Genevieve Gergis opened their first Los Angeles restaurant, Bestia, the city fell in love. By the time they launched their second restaurant, Bavel, the love affair had expanded to cooks and food lovers nationwide. Bavel, the cookbook, invites home cooks to explore the broad and varied cuisines of the Middle East through fragrant spice blends; sublime zhougs, tahini, labneh, and hummus; rainbows of crisp-pickled vegetables; tender, oven-baked flatbreads; fall-off-the-bone meats and tagines; buttery pastries and tarts; and so much more.

Bavel—pronounced bah-VELLE, the Hebrew name for Babel—is a metaphor for the myriad cultural, spiritual, and political differences that divide us. The food of Bavel tells the many stories of the countries defined as “the Middle East.” These recipes are influenced by the flavors and techniques from all corners of the region, and many, such as Tomato with Smoked Harissa, Turmeric Chicken with Toum, and Date-Walnut Tart, are inspired by Menashe’s Israeli upbringing and Gergis’s Egyptian roots. Bavel celebrates the freedom to cook what we love without loyalty to any specific country, and represents a world before the region was divided into separate nations. This is cooking without borders.
Ori Menashe is co-owner and executive chef of Bestia and Bavel, which was named “Best Restaurant of the Year” by the Los Angeles Times, Eater, Los Angeles magazine, Time Out, and Tasting Table, and has been nominated as a finalist for a James Beard Best New Restaurant.

Genevieve Gergis is the co-owner and pastry chef of Bestia and Bavel.

Lesley Suter is the travel editor for Eater, the former food editor for Los Angeles magazine, and a two-time James Beard Award winner for food writing.
“I started writing down all the things I want to cook from Bavel and then quickly had to abandon the list. It was a pointless endeavor as I was simply copying the whole cookbook! Ori and Genevieve manage to pull off a style of cooking that is both familiar (and therefore comforting) but also new (and therefore fresh and exciting). This is the sort of food I could live on.”—Yotam Ottolenghi, chef and author of Ottolenghi Flavor

“Organized to give you a clear view into the minds of  some of the hardest-working chefs in the business, Ori  and Genevieve share the building blocks of their famously intense and flavorful cooking. They reveal the keys to mastering this depth of flavor at home through their collection of thoughtfully curated, carefully articulated recipes, with plenty of guidance. PS: The masterful breads included in the book are some of the best I’ve ever tasted!”—Chad Robertson, co-owner of Tartine and author of Tartine Bread

“By drawing from all corners of the Middle East, their family heritages, and an evocative personal cooking philosophy that remains centered on Downtown Los Angeles, Ori and Genevieve have created something truly one of a kind with Bavel. This cookbook is as compelling as it gets.”—Michael Solomonov, chef and co-owner of Zahav