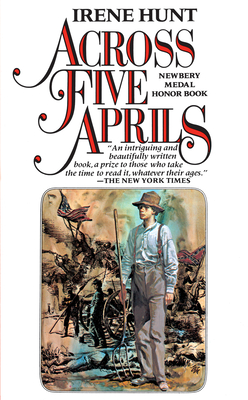 By Irene Hunt
List Price: $8.99
Our Price: $6.99
(Save: $2.00 22%)
In Stock—Click for Locations
The Newbery Award-winning author of Up a Road Slowly presents the unforgettable story of Jethro Creighton—a brave boy who comes of age during the turbulent years of the Civil War.

In 1861, America is on the cusp of war, and young Jethro Creighton is just nine-years-old. His brother, Tom, and his cousin, Eb, are both of fighting age. As Jethro's family is pulled into the conflict between the North and the South, loyalties are divided, dreams are threatened, and their bonds are put to the test in this heart-wrenching, coming of age story.

“Drawing from family records and from stories told by her grandfather, the author has, in an uncommonly fine narrative, created living characters and vividly reconstructed a crucial period of history.”—Booklist
Irene Hunt was the author of many distinguished books for young readers. Her first novel, Across Five Aprils, was a Newberry Award nominee and received a Lewis Carroll Shelf Award. Her second novel, Up a Road Slowly, was awarded the Newberry Medal in 1966. Ms. Hunt was born in southern Illinois and received degrees from the University of Illinois and the University of Colorado. For many years she taught in the public schools of northern Illinois, and later taught psychology at the University of South Dakota. She died in 2001.
Praise for the Novels of Irene Hunt

“An intriguing and beautifully written book, a prize to those who take the time to read it, whatever their ages.”—The New York Times

“This is a beautifully written book, filled with bloodshed, hate, and tears, but also with love, loyalty, and compassion, with unforgettable characters, and with ideas and implications that have meaning for young people today.”—Chicago Tribune