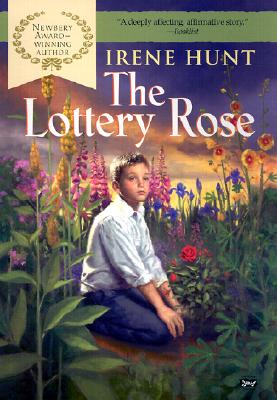 Abused by his mother and her boyfriend, Georgie Burgess learns to hide his hurt. He withdraws into a safe and secret world of beautiful gardens filled with roses—just like those in the library book he treasures.

When Georgie wins a small rosebush in a grocery store lottery he gives it all the love and caring he’s never had. Georgie’s life begins to open up for him when the courts send him to a home for boys where he will be safe. Slowly, and not without pain, Georgie learns to give—and to receive—love...
Irene Hunt was the author of many distinguished books for young readers. Her first novel, Across Five Aprils, was a Newberry Award nominee and received a Lewis Carroll Shelf Award. Her second novel, Up a Road Slowly, was awarded the Newberry Medal in 1966. Ms. Hunt was born in southern Illinois and received degrees from the University of Illinois and the University of Colorado. For many years she taught in the public schools of northern Illinois, and later taught psychology at the University of South Dakota. She died in 2001.
Praise for the Novels of Irene Hunt

“An intriguing and beautifully written book, a prize to those who take the time to read it, whatever their ages.”—The New York Times

“This is a beautifully written book, filled with bloodshed, hate, and tears, but also with love, loyalty, and compassion, with unforgettable characters, and with ideas and implications that have meaning for young people today.”—Chicago Tribune