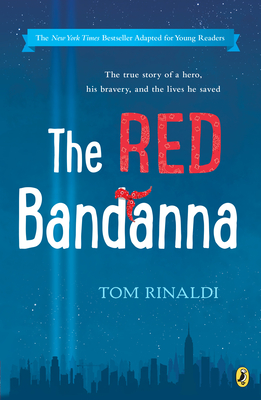 Welles Crowther did not see himself as hero. He was just an ordinary kid who played sports, volunteered at his local fire department, and eventually headed off to college and then Wall Street to start a career. Throughout it all, he always kept a red bandanna in his pocket, a gift from his father. On September 11, 2001, Welles was working on the 104th floor of the South Tower of the World Trade Center when the Twin Towers were attacked. That day, Welles made a fearless choice and in doing so, saved many lives.

The survivors didn’t know his name, but one of them remembered a single detail clearly: the man was wearing a red bandanna. Welles Crowther was a hero.

Award-winning ESPN reporter Tom Rinaldi brings Welles's inspirational story of selflessness and compassion to life in this accessible young readers’ adaptation of his New York Times bestselling book. This powerful story of making a difference through our actions is perfect for helping the post-9/11 generation understand the meaning of this historic day through the eyes of one young man.

“Rinaldi’s young reader edition of his award-winning adult story puts a face on that day (9/11), a hero’s face, and brings to young people someone who stood brave in the toughest of times and who, in the end, was lost doing his best to help others survive.”—VOYA
Tom Rinaldi has been a national correspondent at ESPN since 2002. A recipient of ten national Sports Emmy Awards and five Edward R. Murrow Awards, he covers human-interest stories across all sports, including his famous feature story about Welles Crowther. A graduate of the University of Pennsylvania and the Columbia University Graduate School of Journalism, and a native of Brooklyn, Tom now lives in New Jersey with his wife, Dianne, and their two children, Jack and Tess.
Winner of the Christopher Award
An ILA-CBC Children’s Choices Book
A NCSS-CBC Notable Social Studies Book

*“At times a documentation of history, at others an emotional journey, this remarkable true story of bravery and heroism places readers directly inside the South Tower as events unfolded; Rinaldi’s writing heightens the senses capturing the smoke, heat, and smells, while also making the uncertainty, confusion, urgency, and raw human emotion very real—a feat not often accomplished in books for this age group.”—School Library Journal, starred review

“A moving, deeply felt tribute to a courageous individual who sacrificed his life to save others.”—Kirkus Reviews