How to Code a Rollercoaster (Hardcover) 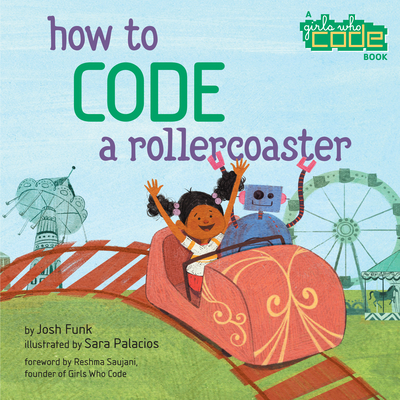 How to Code a Rollercoaster (Hardcover)


Backordered
Pearl and Pascal take their coding adventures to the amusement park in this follow-up picture book from our Girls Who Code program!

Pearl and her trusty rust-proof robot, Pascal, are enjoying a day out at the amusement park. Spinning teacups, ice cream, and of course: rollercoasters! Through the use of code, Pearl and Pascal can keep track of their ride tokens and calculate when the line is short enough to get a spot on the biggest ride of them all--the Python Coaster. Variables, if-then-else sequences, and a hunt for a secret hidden code make this a humorous, code-tastic day at the amusement park!
By day, Josh Funk writes C++, Java Code, and Python scripts as a software engineer, which he's been doing for the last twenty years. In his spare time he uses ABC's, drinks Java coffee, and writes picture book manuscripts such as How to Code a Sandcastle, Lady Pancake & Sir French Toast, The Case of the Stinky Stench, Dear Dragon, and more. Josh graduated from the UMass Amherst Commonwealth College with a degree in computer science. He is a board member of the Writers' Loft in Sherborn, Massachusetts and the co-coordinator of the 2017 New England Regional SCBWI Conference.