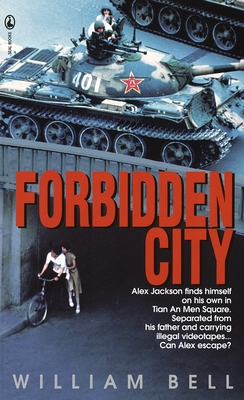 
Backordered
Seventeen-year-old Alex Jackson comes home from school to find that his father, a CBC news cameraman, wants to take him to China's capital, Beijing.  Once there, Alex finds himself on his own in Tian An Men Square as desperate students fight the Chinese army for their freedom.  Separated from his father and carrying illegal videotapes, Alex must trust the students to help him escape.

Closely based on eyewitness accounts of the massacre in Beijing, Forbidden City is a powerful and frightening story.
William Bell was a Canadian author whose young adult novels have been translated into nine languages and have won a number of awards, among them the Manitoba Readers’ Choice Award, the Mr. Christie’s Award, the Ruth Schwartz Award, and the Canadian Librarians’ Association Award. He died in 2016.