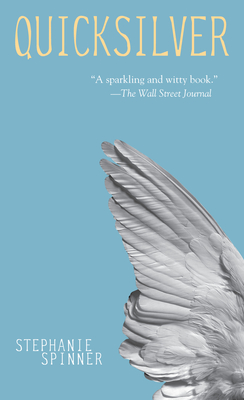 
In Stock—Click for Locations
Hermes—also known as Mercury, Wayfinder, and Prince of Thieves—has many talents. Wearing his famed winged sandals, he does the bidding of his father Zeus, leads the dead down to Hades, and practices his favorite arts of trickery and theft. He also sees the future, travels invisibly, loves jokes, and abhors violence. And he’s an entertaining and ideal narrator on a fast-paced journey through ancient Greek mythology—from Medusa’s cave to Trojan War battlefields to the mysterious Underworld.
Stephanie Spinner brings the famous messenger—and the best-known gods and mortals of mythology—to life with high action and spare, powerful prose.
Stephanie Spinner, after a distinguished career in children’s book publishing, is now a full-time writer. She lives in Pawling, NY.
“A sparkling and witty book . . . Seldom in any genre, let alone among books for children, does one come across such a splendid opening line as: ‘It’s dark and gloomy, and it smells like dead sheep, but when Zeus says go to Hell, I go.’ So begins the tale of Hermes, fleet-footed messenger of the Olympian gods, who . . . explains his decisive role in some of the best-known Greek myths.” –The Wall Street Journal

“Hermes is a wonderfully engaging narrator. . . . It’s good to be a god.” –Kirkus Reviews, Starred

“Hermes, the winged messenger of the gods, narrates a compelling and amusing account of his experiences with some of the most well-known characters in Greek mythology. . . . Teens who love mythology will be thrilled with Spinner’s deft and witty retelling of Greek legends.” –VOYA

“The hip but not hypertrendy tone of the narration as well as the bite-sized stories afforded by the episodic structure will entice junior-high and high-school aged readers to try Hermes’ winged sandals on for size.” –The Bulletin of the Center for Children’s Books